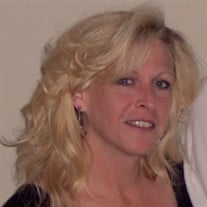 Lora Lea Dahlenburg, one of two daughters of Gerald E. and Marjorie JoAnn (Jurgensmeier) Dahlenburg, was born November 7, 1965, at Yankton, South Dakota. As a young girl, her family moved to Howe, Nebraska where Lori, as she was known, attended grade school. Lori then went on to Auburn High School, graduating with the class of 1984. On April 12, 1988, Lori was united in marriage to Doyal Hanger at Springdale, Arkansas. The couple would be blessed with two children: Kevin and Natasha. They made their home in Arkansas raising their family, but later divorced. Lori held many jobs throughout her lifetime. Her first job was at her father’s store, Dahlenburg’s Gun Shop in Howe, Nebraska. She worked at Fayetteville Regional Airport, Washington Regional Medical Center, and at Greenland Elementary School all in Arkansas. She was the cafeteria manager at Greenland Elementary and all the students knew and adored her. While employed at both the hospital and elementary school, Lori attended multiple classes and workshops to maintain certifications for her employment. After moving back to Auburn, Nebraska, Lori worked for a number of years at Allie’s Bistro, bartended at several establishments, and for the last 14 years, Lori had been the grounds keeper for Rose Winegardener. In her spare time, Lori loved being outdoors, whether it was working in her garden, fishing at the campsite, or sitting around her firepit enjoying a cold beer. Lori took pride in her home, fixing things on her own, she was handier than most handy-men. Lori was also known to be a little stubborn with her do it all herself attitude. She was quite the pool shark and could sing along with just about any song on the radio. She also loved to go “roadtripping” often with her feet out the window. Lori loved people and due to her big personality, she never knew a stranger. On Saturday, June 19, 2021, Lori unexpectedly passed away at her home in Auburn, having reached the age of 55 years, 7 months, and 12 days. Her parents, grandma Lydia Dahlenburg, and great-aunt Aletha Bowen preceded her in death. Those left to remember her fun-loving spirit include her son Kevin Hanger and Whitney Kane of Omaha; daughter Natasha Hanger of Sherman, TX; grandchildren Acea Crawford, Xander Hanger, Erik “Lemon” Crawford, Mikey Kane, Gabby Kane; sister Sherry Dahlenburg of Auburn; aunt and uncle Debbie and Rich Cox of Howe; cousin Demi Cox; best friend Rhonda Yoesel; other relatives and friends. Memorials are suggested to family choice. View Lori's memorial service via Livestream at: https://livestream.com/accounts/13846112/events/9736573

Lora Lea Dahlenburg, one of two daughters of Gerald E. and Marjorie JoAnn (Jurgensmeier) Dahlenburg, was born November 7, 1965, at Yankton, South Dakota. As a young girl, her family moved to Howe, Nebraska where Lori, as she was known, attended... View Obituary & Service Information

The family of Lori (Dahlenburg) Hanger created this Life Tributes page to make it easy to share your memories.

Lora Lea Dahlenburg, one of two daughters of Gerald E. and Marjorie...