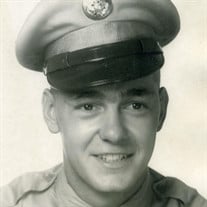 Loyal Julius Eitzmann, one of 6 children of Otto and Neva (Schneider) Eitzmann, was born October 23, 1934 in Hardy, Nebraska in Republican County in Kansas. He was baptized November 4, 1934 and confirmed June 20, 1940 at St. Peter’s Lutheran Church in Byron, Nebraska. Loyal attended school in Hardy, graduating from high school in 1952. On June 29, 1955 Loyal entered the United States Army and served in the 5th Artillery Battalion until June 28, 1957, when he was transferred to the Army Reserve. He received his honorable discharge on May 31, 1963. On March 29, 1959 Loyal and Elva Remmers were united in marriage at St. John Lutheran Church near Auburn, Nebraska. They lived in Hebron and Superior, Nebraska until moving to the farm near Auburn in 1965. They were blessed with four sons: Russ, Ryan, Jay, and Jeff. Loyal worked in his early years as a lineman for LT&T out of Superior. Upon moving to Auburn, he farmed for the next 20 years. After farming he worked in Security at Cooper Nuclear Station near Brownville until retiring in 1999. Joining St. John Lutheran (Stone) Church in 1965, Loyal held several offices in the church, including President of Church Council. He was a member of American Legion Post #330 in Johnson and served as commander several times. He was also a Past President of Farm Bureau. Loyal loved to bowl and bowled with many teams and leagues. He was a Royals Baseball fan and enjoyed about any Husker sport. Mostly, he loved attending his grandkids activities through the years. After a short stay, Loyal passed away at Bryan East Medical Center in Lincoln on Wednesday, January 16, 2019. In addition to his parents, he was preceded in death by wife Elva on June 6, 2018, a granddaughter Joyce Anna Eitzmann, brother Eldon and his wife Wilma, sister-in-law Barb Eitzmann, and brothers-in-law Stan Lang and Bob Avey. Loyal is survived by his sons and daughters-in-law sons Russ and Jeanne of Ft. Walton Beach, FL; Ryan and Mary of Lincoln; Jay and Kim of Lincoln; Jeff and Kathy of Lincoln; grandchildren (spouses) Rick Eitzmann (fiancée Kathy); Jen (Brandon) Havard; Devin Eitzmann (fiancée Cassie); Brittni (Thomas) Klostermeyer; Alyssa (Alex) Rousseau; Jaylynn (Tayler) Schubauer; Blake (Courtney) Eitzmann; Derek Eitzmann; Connor Eitzmann; great-grandchildren Gary “Trey” Gessendorf, Adison, Cooper, Parker Eitzmann, Conlei Hurley; brothers and sisters Roger Eitzmann of Beatrice; Iverna Lang of Edgar; Genell (Burley) Copas of Beatrice; Twila Avey of Lincoln; sister-in-law Norma Eitzmann of Superior; brother-in-law Larry (Margaret) Remmers of Lincoln; other relatives and friends. A memorial service will be Tuesday, January 22, 11:00 a.m. at St. John Lutheran (Stone) Church near Auburn. Burial of ashes will follow in the church cemetery. Visitation will be at the funeral home in Auburn Monday 9:00 a.m. to 8:00 p.m., with family greeting friends 6:00 to 8:00. Memorials are suggested in lieu of flowers.

Loyal Julius Eitzmann, one of 6 children of Otto and Neva (Schneider) Eitzmann, was born October 23, 1934 in Hardy, Nebraska in Republican County in Kansas. He was baptized November 4, 1934 and confirmed June 20, 1940 at St. Peter&#8217;s... View Obituary & Service Information

The family of Loyal J. Eitzmann created this Life Tributes page to make it easy to share your memories.

Loyal Julius Eitzmann, one of 6 children of Otto and Neva (Schneider)...

Send flowers to the Eitzmann family.