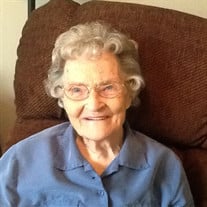 Aloda Lucille Wheeldon was born to Ruth and George W. Cravey near Tecumseh in the same farmhouse her mother was born in, which was built by her Grandpa Peek. Her dad was killed in a car accident when she was a toddler. Later, her mother married Earl Lantz and she began using his last name. She disliked her first name and always went by Lucille. An older sister died as an infant before Lucille was born. After living in the Tecumseh and Wilber areas, she moved with her family to Brownville when she was 14. She loved Brownville and always called it home. In January 2015, she moved to The Gardens assisted living in Crete to be near her daughter and in July of this year she moved to Tabitha of Crete when her health became more fragile. She celebrated her 96th birthday with Kenton, Russ and Janice and all their families in August. Family was always her greatest joy. During WWII, Lucille and her parents and her Grandpa Peek moved to Culver City, CA to work in the bomb factories. It was only during the past few years that her children realized it was a Rosie the Riveter job. Lucille’s mother didn’t like CA, so after a few months they returned to NE and worked at bomb factories in Mead. Lucille and LaVerne Wheeldon knew each other in Brownville and began dating when they met up again in CA and became engaged after he was shipped to the South Pacific. They married on January 1,1946...just a few days after he returned from the war. They made Brownville their home and had three children, Janice, Kenton and Daryl. Daryl died in a motorcycle accident near Brownville in 1975. Mom lived in the house she and dad built in 1946 for almost 70 years. While the children were young, Lucille was a homemaker. Later, she worked at local businesses and was the first bookkeeper for the Brownville Water and Sewer Dept., a job she kept until her 80’s. Of all her attributes, being a mom was the one that came so naturally. Even as dementia took its toll, she was always the Mom....asking how everyone was, reminding us to eat or get some rest and wanting to share her meals with us. Being a great mom was her talent and from someplace, deep inside, she still did it....even on the days she didn’t know our names. Those left to mourn are her son Kenton Wheeldon of Brownville and friend, Vera Ploeger of Falls City and daughter and son in law, Janice and Russ Sears of Crete. Grandchildren are Stephanie (Brad) Harms of Auburn, Justin Wheeldon and fiancée Malina Green of Brownville, Todd (Brenna) Sears of Chatham, IL, Travis (Jackie) Sears of Crete and Thad (Angela) Sears of Crete. Great grandchildren include Tyler and Hunter Harms, Austin and Daryl Wheeldon, Joey and Jackson Sears, Murphy and Blake Sears, Kalyn, Clayton, and Logan Sears, Taryn and Ethan Koch and Malina’s children, Gyliane, Teagan, Emoree, and Fenix. She was preceded in death by son Daryl and husband, LaVerne. Memorials are suggested to the Brownville Methodist Church or Brownville Christian Church. Viewing of Lucille's funeral available via Livestream at: https://livestream.com/accounts/13846112/events/7901331

Aloda Lucille Wheeldon was born to Ruth and George W. Cravey near Tecumseh in the same farmhouse her mother was born in, which was built by her Grandpa Peek. Her dad was killed in a car accident when she was a toddler. Later, her mother... View Obituary & Service Information

The family of Lucille Wheeldon created this Life Tributes page to make it easy to share your memories.

Send flowers to the Wheeldon family.