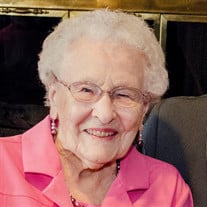 Mary Madeleine (Migot) Schmucker, one of two children of Leon and Ida (Chanel) Migot, was born March 11, 1916, at the family home near Brock, Nebraska. She attended school in Brock and graduated from high school there in 1934. Mimi never missed an alumni banquet, attending 81 consecutive years. After high school she went to Peru Teachers College for one year, but left school to care for her ailing mother. On June 18, 1938, Madeleine was united in marriage to James Ival Schmucker at the Ernest Rotter farm east of Brock. They were blessed with three sons, Gary, Robert, and James, and would spend their life together on the farm where she was born. Mimi kept busy as a farm wife and raising her three sons. She was very active in 4-H, supporting her sons in their projects and other activities. She also worked at the election polls for many years. As a lifetime member of the Brock United Methodist Church, she was involved in many church groups, holding various positions within the church. She was a member of The Order of the Eastern Star Trestle Board Chapter #67 in Brock until it disbanded, when she joined Chapter #263 in Brownville. Mimi also belonged to Kensington Club and the Brownville Historical Society. She was a big sports fan, and supported Brock and then Johnson-Brock school activities, as well as Peru State College and the University of Nebraska-Lincoln. A card player, she especially enjoyed bridge and pinochle. A special love of Mimi’s was attending the “Senior Prom” at Johnson-Brock Schools. She enjoyed traveling with Ival, and the two of them were always on the go. They especially enjoyed live theater. The Brownville Village Theater and the Loft Theater in Manley were two of her favorites. In March of this year, Mimi was blessed to be able to celebrate her 100th birthday. She was grateful for the open house held in her honor at the Arbor Manor in Auburn, and very much enjoyed visiting with the many, many family members and friends who stopped in to honor her that day. On Wednesday, April 6, 2016, Madeleine passed away at her home on the family farm where she was born. She had attained the age of 100 years and 19 days. In addition to her parents, she was preceded in death by her husband Ival (on August 5, 2013), and her infant brother George. Those left to remember her spunk and character include her sons and daughters-in-law Gary and Linda of Gering; Robert and Carol of Raymond; Jim and Kim of Scottsbluff; grandsons Wade of Omaha; Chad of San Francisco; great-granddaughter Emily of Omaha; other relatives and many friends. Memorials suggested in lieu of flowers to Brock Methodist Church, Peru State College Foundation, Johnson-Brock Foundation, or family choice.

Mary Madeleine (Migot) Schmucker, one of two children of Leon and Ida (Chanel) Migot, was born March 11, 1916, at the family home near Brock, Nebraska. She attended school in Brock and graduated from high school there in 1934. Mimi never... View Obituary & Service Information

The family of Madeleine "Mimi" Schmucker created this Life Tributes page to make it easy to share your memories.

Mary Madeleine (Migot) Schmucker, one of two children of Leon...

Send flowers to the Schmucker family.