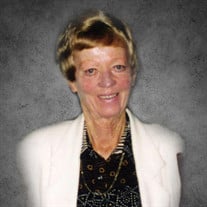 Marcia Lee Gauchat, one of two children of Oscar Weldon and Caroline (Richardson) Wangeman, was born July 6, 1940, at Kingman, Arizona. As a young girl, Marcia and her family moved to Louisiana, where Marcia would grow up and attend school in New Orleans. After graduating from high school, Marcia began working at a dry-cleaning business in New Orleans. It is while working there that Marcia would meet her future husband, Frederick Gauchat, Jr. Fred was stationed in New Orleans while enlisted in the Army and would take in his uniforms to be dry cleaned. Marcia always insisted that Fred would purposely dirty his uniforms, and Fred insisted Marcia would put stains on his uniforms just so he would bring them back in and visit her. On May 29, 1959, Marcia was united in marriage to Frederick Gauchat, Jr. in Kansas. They would make their home on a farm near Brock, Nebraska, and were blessed with three daughters: Jeannette, Stephanie, and Charlotte. Marcia not only filled the role of running the household and raising their daughters, but she was Fred’s right-hand on the farm. From driving all the farm trucks and waiting in line to empty them, to bringing meals out to the field, Marcia loved the farm. Although she moved out of the South, Marcia continued southern traditions while living in the Midwest. One of those traditions was every New Year’s Day, Marcia would prepare black-eyed peas and cabbage (green backs), which was to bring good luck and money for the coming year. Marcia had a love for gardening, and always had a large garden where she would spend hours hoeing to make sure no weeds were in sight. Her family meant everything to her, especially when she was blessed with grandchildren. Marcia often made claim to teaching her grandchildren to drive, something she took pride in, having them begin to drive as soon as they were old enough to sit on her lap. Marcia also had a love of shopping, a trait that she shared with her daughters and grandchildren. After losing her husband Fred in October of 2018, Marcia continued to live on the farm. Due to declining health, Marcia was admitted to Bryan Medical Center West in Lincoln, Nebraska. It is there that she passed away on Thursday, March 18, 2021, having reached the age of 80 years, 8 months, and 12 days. Her parents, husband, and brother-in-law Marvin Caspers preceded her in death. Those left to remember her caring ways include her daughters and sons-in-law Stephanie and Jeff Kathol of Shawnee, OK, Charlotte and Brad Easland of Norfolk; grandchildren Brighton (Riley) Meuret, Creighton Kathol, Mallory Easland, Sydney Easland, Blake Easland; brother Robert Wangeman of La Mesa, CA; brother-in-law Ed Gauchat of West Sacramento, CA; sister-in-law Blanche Caspers of Auburn; nephew Mark Caspers; niece Arlis and husband Mike Scanlan; other relatives and friends. A funeral service will be held Saturday, March 27, 2:00 p.m. at Brock United Methodist Church in Brock. Visitation with family greeting friends will be at the funeral home Friday 5:00 p.m. to 7:00 p.m. Burial will follow in Lafayette Cemetery at Brock. Memorials are suggested to Brock United Methodist Church or Lafayette Cemetery.

Marcia Lee Gauchat, one of two children of Oscar Weldon and Caroline (Richardson) Wangeman, was born July 6, 1940, at Kingman, Arizona. As a young girl, Marcia and her family moved to Louisiana, where Marcia would grow up and attend school... View Obituary & Service Information

The family of Marcia Gauchat created this Life Tributes page to make it easy to share your memories.

Marcia Lee Gauchat, one of two children of Oscar Weldon and Caroline...

Send flowers to the Gauchat family.