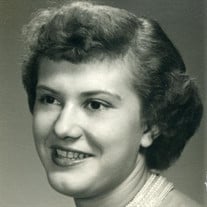 Marlyce Zan (Haak) Robling, daughter of John Earl and Carrie Rilla (Jurgens) Haak, was born July 20, 1942 in Bruning, Nebraska. She was baptized in the Bruning Methodist Church, and attended school in Geneva, Nebraska. Marcy, as she was known to most, participated as a cheerleader while in high school. On January 19, 1959 Marcy was married to Joseph Lee Robling at a Methodist church in Newkirk, Oklahoma. They were blessed with four children: Brenda, Barbara, Rebecca, and Brian. The couple divorced in 1985. Living in Auburn, Nebraska since 1967, Marcy made friends with many people while working at various locations in town. Some of the places she worked include Kelly’s Café, Danny Dare Factory (and later King Louie), American Legion Post #23, Bea’s Tavern, White Blackbird, Farmer’s Co-op, Nemaha County Hospital, Pizza Hut, Auburn High School, and as an Avon Lady. She was proud of how she was able to help patients while a nurse’s aide at the hospital. Marcy had been a member of the Auburn Eagles Club, and bowled in leagues in town. She enjoyed fishing, playing “Yahtzee” and “Greedy”, shuffleboard, pull tabs and Keno. A favorite pastime was visiting with friends at Bea’s. Experiencing health problems, Marcy was admitted to a hospital in Omaha and then Nemaha County Hospital in Auburn. It was there she passed away on Saturday, March 12, 2016 at the age of 73 years, 7 months, and 21 days. Her parents, infant sister Audrey, and sister Gweneth Stetina preceded her in death. Marcy is survived by her daughters and sons-in-law Brenda and Robin Terrell of Auburn; Barbara and Roy Radloff of Auburn; Becky and Tony Oldfield of Auburn; son and daughter-in-law Brian and Tiffany Robling of Omaha; grandchildren and spouses Ryan and Melissa Mazzulla; Brandon and Bailey Mazzulla; Justin and Jessica Hammer; Amanda and Clay Goudeau; Bobby and Shayla Hammer; Scott Oldfield; Brandon Robling; Brent Robling; great-grandchildren Hunter, Hadley, Brindley, Weston, Landyn, Treven, Alysa, Dustin; sister and brother-in-law Jacae and Bob Sanders of Hastings, NE; brother Randy Haak and friend Sharon of Ohiowa, NE; other relatives and many friends. On-line viewing of funeral service available via LiveStream at : https://livestream.com/accounts/13846112/events/4996490?help=true

Marlyce Zan (Haak) Robling, daughter of John Earl and Carrie Rilla (Jurgens) Haak, was born July 20, 1942 in Bruning, Nebraska. She was baptized in the Bruning Methodist Church, and attended school in Geneva, Nebraska. Marcy, as she was... View Obituary & Service Information

The family of Marcy Robling created this Life Tributes page to make it easy to share your memories.

Send flowers to the Robling family.