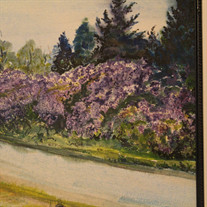 Margaret Yvonne (Christy) Piper, one of two children of Howard Chandler Christy and Edith Evalyn (Gilbert) Christy, was born August 5, 1934 at Auburn, Nebraska. Born during the drought and depression, Chan often told her "she was all they grew in 1934." She lived her entire life in and around the Brock area devoting her time to her family, church, 4-H, the Brock Bugle, and multiple community activities. She attended Brock Consolidated Schools for 13 years graduating in 1952. It was there she met her childhood sweetheart, Marion. She lettered four years in volleyball and softball and played the flute in the BHS band and the Peru State Teachers College Orchestra. She was united in marriage to Marion Fredrick Piper on July 18, 1954 at the Brock Christian Church. To this union seven children were born, Sue, Gary, Dale, Dave, Phil, Christy, and Jenni. Margaret was a member of Trestle Board Chapter #67 Order of the Eastern Star for 62 years. She performed the duties of nearly all stations in the Order. Margaret was a lifelong member of the Brock Christian Church, living a life of faith, teaching her family and sharing God's love. She was baptized in 1946 by Rev. E. C. Davis. Over the years, she served in nearly every capacity; as a Sunday School teacher, deaconess, elder, board member and choir director as well as Nebraska Christian Church (Disciples of Christ) district and state officer. She was involved in 4-H as a member and leader for over 70 years, including 22 years as the Nemaha County 4-H assistant. For many years she was an integral part of the Nemaha County and Nebraska State Fairs. In 2002, she was awarded the Nebraska State 4-H Salute to Excellence Lifetime Volunteer Award. In 1965 she was a founding editor of the Brock Bugle originally started to promote Brock's activities for the upcoming Nebraska Centennial celebration. Co-editors included Claudia Daugherty, Barbara Teten, Rosetta Bidne, Shirley Dettmer, and Ruby Harney. She continued in that capacity until February 2013 when Melissa Sandfort became editor. She was referred to "the best liver specialist in the world" Dr. Michael Sorrell at the University of Nebraska Medical Center and was diagnosed with primary biliary cirrhosis. Margaret received the gift of life on November 30, 1986 from Jimmy P. Majerus, a 10-year-old child the same age as her oldest grandchild. She was the 64th liver transplant patient at UNMC and became the second longest surviving liver transplant recipient. She was always an avid sports fan and school activities supporter. She started on the Brock High School volleyball team that won the Peru State Tournament, Nemaha Valley Conference, and the Mudecas tournaments in 1950-51. Through the generations, Margaret could be found cheering for her children, grandchildren and great-grandchildren at numerous sporting and school events. She served on the Johnson-Brock Board of Education for 8 years. Her grandsons are wearing their Husker shirts in honor of Grandma's devotion to the Nebraska Cornhuskers. Based on the tireless support she provided to children through 4-H and the Kid's Club she led at the Brock Christian Church, she was presented with the Nebraska Governor's Points of Light Award by Governor Michael Johanns on January 22, 2003 and was Daily Point of Light, number 2675, presented by the National Points of Light Foundation on May 6, 2004. She fulfilled a dream of a lifetime when she attended Peru State College and on May 7, 2005 received a Bachelor of Technology Management degree. In later years, Margaret’s family helped to extend her time on Earth by caring for her at her home. On August 23, 2014, at the age of 80 years and 18 days, Margaret passed away at her home, surrounded by family. She was preceded in death by her husband Marion, her parents, Chan and Evalyn Christy, her parents-in-law Fredrick A. and Velma M. Piper, and daughter-in-law Pamela Sue (Kracke) Piper. Those left to remember Margaret’s loving ways include her children and their spouses Susan and Gene Remmers of Auburn; Gary Piper of Brock; Dale and Laurie Piper of Springfield, NE; David and Susan Piper of Brock; Philip Piper of Kearney; Christy and Alan Riggins of Auburn; Jennifer and Jermi Wolken of Donnellson, IA; 14 grandchildren; 18 great-grandchildren (and 2 on the way); brother Harold Christy of Fair Oaks, CA; sisters-in-law Doris Gerdes of Talmage, Vera Rieken of Johnson; brothers-in-law Jack (Linda) Piper of Leesburg, VA, and Kenneth (Irene) Piper of Dunbar; sister-in-law Louella Christy Komuves of Evansville, IN, many other relatives and friends. A funeral service was Wednesday, August 27, 2014 at the Auburn Christian Church, officiated by Rev. Jackie Gfeller. Deanne Gerking was pianist for congregational songs and a duet by Will Behrends and Allyn Remmers. Casket bearers were grandsons Matthew Piper, Clint Piper, Adam Piper, Joshua Riggins, Shannon Riggins, Taylor Riggins, and Jacob Wolken. Granddaughters Teri Epler, Chandra Remmers, Shauna VanWinkle, Sara Sharples, Kelli Whitney, Danielle Piper, and Jessica Wolken were flower attendants. Burial was in Clifton Cemetery near Brock.

Margaret Yvonne (Christy) Piper, one of two children of Howard Chandler Christy and Edith Evalyn (Gilbert) Christy, was born August 5, 1934 at Auburn, Nebraska. Born during the drought and depression, Chan often told her "she was all they grew... View Obituary & Service Information

The family of Margaret Piper created this Life Tributes page to make it easy to share your memories.

Margaret Yvonne (Christy) Piper, one of two children of Howard...

Send flowers to the Piper family.