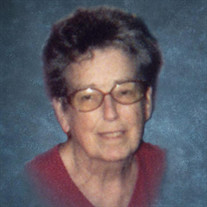 Margaret Irene Dicus was born September 26, 1937 in Anthon, Iowa to William and Mary (Murphy) Dicus. She graduated from Bishop Heelan Catholic High School in Sioux City, Iowa. Margaret was married to Gale Rawson in November of 1958. Their union was blessed with two sons, Allen and Dirk. The couple later divorced. On May 6, 1994 Irene was united in marriage to Ned Ray in Ruston, Louisiana. Ned’s children Becky and Patrick became a part of Irene’s family also. Irene’s focus in life was on her household and raising her children. She also had worked at a Hested’s store and MVP Labs in Omaha for short times. Irene and Ned moved to Auburn, Nebraska and made the town and the Auburn Christian Church their home. Irene had many interests in life. Around the house she enjoyed gardening and tending to flowers. She liked to can produce, and jellies was her specialty. Irene was known for her home cooked meals and homemade bread and ice cream. She was a fan of dirt track racing, the Kansas City Royals (and George Brett), Ronald Reagan, and Dr. Pepper. Ned passed away in 2015 and Irene continued to live in their home and Westbury Heights Apartments until becoming a resident of the Good Samaritan Society-Auburn in November 2017. She enjoyed her time there getting to know other residents and staff. Irene passed away at Good Sam on Friday, December 18, 2020 at the age of 83 years, 2 months, and 22 days. Margaret Irene Ray is survived by her sons and daughter-in-law Allen Rawson of LaVista; Dirk and Shari Rawson of Omaha; stepchildren Becky Ray and husband Rusty of LA; Patrick Ray of CT; grandchildren Rachel Rawson, Marissa (Matt) Strickler, Taylor Rawson, and Bailey Rawson; great-grandson Grady Strickler; brother and sister-in-law William, Jr. and Cleone Dicus of Kingsley, IA; sister Mary Ann Miller of Sioux City, IA; many nieces, nephews, other relatives and friends. A funeral service will be Tuesday, December 22, 1:00 p.m. at the Auburn Christian Church. Visitation will be one hour prior to the service. Masks and social distancing will be required. Burial will follow in the Verdon Cemetery.

The family of Margaret Irene Ray created this Life Tributes page to make it easy to share your memories.

Send flowers to the Ray family.