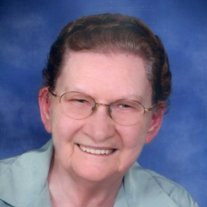 Marjorie Louise (Lampe) DeBuhr, daughter of Edwin and Lelah (Hartzell) Lampe, was born November 29, 1928 near Humboldt, Nebraska. She attended Bratton Union School and graduated from high school there in 1946. On April 29, 1948 Marjorie was united in marriage to Alvin C. DeBuhr at St. Paul Lutheran Church in Auburn, Nebraska. Their union was blessed with four children: Al, Hal, Ann, and Annette. They made their home in Auburn. In her younger years Marge was a waitress at The White Spot, then worked as an operator for Lincoln Telephone and Telegraph in Auburn. Later in life, she served as custodian for E.S.U. #4, the Midway Building, Auburn Public Schools, and the Auburn Chiropractic Center. Marge was a longtime member of St. Paul Lutheran Church, and sang in the choir there. She enjoyed the fellowship of the “early morning coffee group” at Marie’s Café, Korner Kitchen, and Darling’s Café. After Alvin’s passing in November of 2004, Marge continued to live at their home in Auburn until her death. She passed away at her home, with family around her, on Wednesday, September 18, 2013. She was 84 years, 9 months, and 20 days of age. In addition to her husband and her parents, Marjorie was preceded in death by her granddaughter Tabitha and sister Mildred Dunn. Marjorie is survived by her children Al DeBuhr of Dawson; Hal DeBuhr of Peru; Ann Earhart of Buckeye, AZ; Annette and husband Rennie Sasse of Lincoln; 6 grandchildren; 2 great-grandchildren; brothers Wayne Lampe of Reno, NV; Sterling and wife Nadine Lampe of Falls City; other relatives and friends. Memorials in lieu of flowers are suggested to the Auburn Rescue Squad or Hospice of Tabitha.

The family of Marjorie (Lampe) DeBuhr created this Life Tributes page to make it easy to share your memories.

Send flowers to the DeBuhr family.