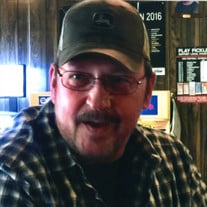 Mark Ray McConnaughey, one of three sons of Jack and Linda (Beetem) McConnaughey, was born December 17, 1963, in Nebraska City, Nebraska. He attended Cochran School near his home through 4th grade, then started at Auburn Public Schools where he graduated in 1982. Mark belonged to the Math and Science Club in high school and was proud of his time playing on the Bulldog football team. Mark then attended Peru State College at Peru, where he earned a degree in Industrial Arts. He was member and served as president of Epsilon Pi Tau, an IA fraternity on campus. On April 29, 1989, Mark was united in marriage to Jodie Core in Council Bluffs, Iowa. Their first home was in Auburn for about a year before they moved to “Kite’s farm home” southeast of Auburn. Mark and Jodie were blessed with their son Joel in 1993, and in 1995 the family moved to their current home in the same vicinity. Mark began working alongside Jim Kite on Jim’s farm in 1988, a job he loved and would continue for the rest of his life. A year later he started at Magnolia Metals in Auburn and also worked there for over 30 years. No matter which job he was working, Mark took great pride in his work! Another bonus, especially on the farm, was Mark’s ability to fix anything and make it work. When he wasn’t working Mark was an avid hunter and general outdoorsman and was always happy spending time with family. He often stated happiness was “farm, hunt, home”. Mark was always willing to help others and would drop what he was doing to go where he was needed. And he seemed to be a “magnet” for little kids and dogs. 4-H was important to Mark, and he had been a member of Auburn Eagles Aerie #3767. After becoming suddenly seriously ill, Mark was life-flighted to Mercy One Medical Center in Des Moines, Iowa because it was the nearest hospital with an open bed. Despite the efforts of doctors and staff, he passed away there on Wednesday, August 18, 2021, at the age of 57 years, 8 months, and 1 day. His mother Linda, parents-in-law Jack and Marlene Core, and brother-in-law Rusty Core preceded him in death. Among the many who will miss Mark’s laugh and good-natured ways are his wife Jodie of Auburn; son and daughter-in-law Joel and Dani of Auburn; father Jack (Phyllis) of Auburn; brothers David of Auburn and Brian (Brook) of Plattsmouth; brother-in-law Rick (Nancy) Core of Peru; nieces and nephews Cara Bell, Jake Ott, Cheyenne Core, Blake and Brityn McConnaughey; special friends (like family) Jim and Nancy Kite and their family; many aunts, uncles, other relatives and many friends. A funeral service will be Monday, August 23, 3:00 p.m. at Hemmingsen Funeral Home in Auburn. Visitation with family will be two hours prior to the service, beginning at 1:00 p.m. Mark’s body will be cremated following the service and his ashes will be buried on Joel’s farm with a tree planting during a private family occasion. Memorials in lieu of flowers are suggested to family choice. View Mark's service via Livestream at: https://livestream.com/accounts/13846112/events/9813311

Mark Ray McConnaughey, one of three sons of Jack and Linda (Beetem) McConnaughey, was born December 17, 1963, in Nebraska City, Nebraska. He attended Cochran School near his home through 4th grade, then started at Auburn Public Schools where... View Obituary & Service Information

The family of Mark McConnaughey created this Life Tributes page to make it easy to share your memories.

Mark Ray McConnaughey, one of three sons of Jack and Linda (Beetem)...

Send flowers to the McConnaughey family.