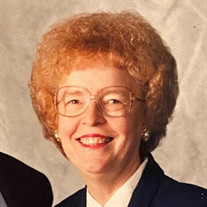 Marlene Mary Bohling was born in Auburn, Nebraska on December 29, 1935 to John William and Mary Kathryn (Rogge) Bohling of Auburn. She was the youngest of five children. She was baptized on January 26, 1936 by Pastor Wiebki and confirmed on April 2, 1950 by Pastor Hummel. Her confirmation verse was John 8: 31-32. She attended Rohrs Country School through 8th grade and graduated from Auburn High School in 1953. She attended one full year at Peru State College and then attended summer classes until she reached her junior year. Marlene taught country school for two years at Pleasant View - located South of Martin Luther Church and then one year at Happy Valley - Southwest of Auburn. She was a substitute teacher at Shurtleffs School for a short time. Later she worked at Jack & Jill, Hinky Dinky, and Sunmart for seventeen years, and of that time she served as the bakery manager for twelve. She couldn’t help but sneak her grandchildren waffle cookies when they came to visit her. On December 14, 1956 Marlene did what she said she would never do, she followed in the footsteps of her three sisters and married a “Long Brancher.” On that day Marlene married Eiber Alberts at St. Paul (Hickory Grove) Lutheran Church near Auburn. Marlene and Eiber’s marriage was blessed with three children, Rebecca JoAnn, Mary Lynette, and Timothy Scott, and would last 63 years. Except for the year and three months they lived in Auburn after they were married, Marlene lived her entire life on the farm where her parents lived when she was born. Marlene loved her church and was a lifetime member of Hickory Grove. She taught Sunday school, sang in the choir, and was a member and president of the Ruth Naomi Circle for many years. She made many cakes for special occasions and was on the call committee to call Pastor Paul. As a person strong in her faith, she raised her kids and grandkids to follow in her footsteps. Marlene, also known as “The Cake Lady,” was best known for the creation of her beautiful and delicious cakes that made each event special for over 53 years. Throughout her life, she touched countless people with her famous personalized “Marlene Cakes.” From weddings to graduations, birthdays, and any occasion in-between, she traveled near and far (including all the way to Texas) to deliver her extravagant creations. During the school year, you would find Marlene and Eiber walking hand-in-hand into the gym carrying their stadium seats. They spent thousands of hours watching their kids’ and grandkids’ activities including sports, speech, music, and many more. When she wasn’t at the gym, you would find her in the kitchen preparing food for her family or for the many catering jobs she had through MA’s catering, a business they ran with Wayne and Willy Moerer. MA’s catering served events as small as the Johnson alumni banquet all the way up to 1,200+ people at the University of Nebraska’s Coaches Clinic. Marlene was preceded in death by her grandparents Herman and Anna (Rohrs) Bohling, August and Sophie (Hilmer) Rogge; step-grandfather Henry Rabe; parents John W. and Mary (Rogge) Bohling; parents-in-law Henry and Clara (Tuxhorn) Alberts; brother and sister-in-law Vern and Carol Bohling; sisters Berneice Boeck and Vera Plager; brother-in-law Mervin Geyer; sister-in-law and husband Dorthea and Arnold Kuhlmann; brother-in-law Gerald Oestmann; sister-in-law Willy Moerer. Marlene is survived by her husband Eiber “Ike” Alberts of Auburn; children and their spouses Becky and Randall Rippe of Johnson, Mary Lyn and Bill Kruger of Auburn, Tim and Amy Alberts of Auburn; grandchildren Kyle Rippe of Johnson, Thomas and Erin Wininger of Springfield, MO, Rachel and Jared Meiergerd of Bennet, Brooke and Connor Manning of Morrison, CO, Kayla and Andrew Schulte of Doniphan, Hanna and Tom Danner of Maryville, MO, Kendra and Devin Beller of Lincoln, and Evan Alberts of Auburn; step-grandchildren Adam and Heidi Kruger of Cheney, Chad Kruger of Brownville, Connor and Aidan Smith of Auburn; great-grandson Jackson Ryan Schulte, born the day before she passed; step-great-grandchildren Lexi and Anson Kruger; sister Wilma Geyer of Humboldt, brothers-in-law Evert Boeck of Smith Center, KS, Richard Plager of Humboldt, Wayne Moerer of Johnson; sister-in-law Vivian Oestmann of Auburn; our special family Paul, Vira, Christina and Anna Lillenas. A funeral service with social distancing encouraged will be held Tuesday, September 15, 2020, 2:00 p.m. at St. Paul Lutheran (Hickory Grove) Church near Auburn. The funeral service will be broadcast on 87.9 f.m. available in church parking lot. Burial will follow in the St. Paul (Hickory Grove) Cemetery. Visitation will be held at Hemmingsen Funeral Home in Auburn on Monday from 9:00 a.m. to 8:00 p.m. with family greeting friends 5:00 to 8:00. Funeral service will be available to watch via Livestream at: https://denverbroncos.zoom.us/j/92022425805

Marlene Mary Bohling was born in Auburn, Nebraska on December 29, 1935 to John William and Mary Kathryn (Rogge) Bohling of Auburn. She was the youngest of five children. She was baptized on January 26, 1936 by Pastor Wiebki and confirmed... View Obituary & Service Information

The family of Marlene M. Alberts created this Life Tributes page to make it easy to share your memories.

Marlene Mary Bohling was born in Auburn, Nebraska on December...

Send flowers to the Alberts family.