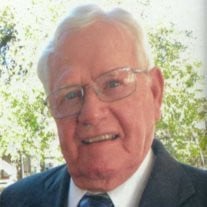 Marlin Gene Scheer, one of three sons of Oscar H. and Esther (Dickmeyer) Scheer, was born April 19, 1933 at Arlington, Nebraska. He was baptized May 7, 1933 by Rev. G.W. Wolter and confirmed March 30, 1947 by Rev. Carl Hellmann, both at St. Paul’s Lutheran Church in Arlington. Marlin attended St. Paul’s School and graduated from Arlington High School. On June 1, 1958 Marlin was married to Joan “Joni” Moseman at Immanuel Lutheran Church in Hooper, Nebraska. They made their home in Arlington, and were blessed with two children, Judith and Kendall. Marlin farmed most of his adult life, but he put his talents to work in other areas also. He worked as a carpenter during the slow farming times. He worked for the City of Arlington after retiring from farming, and after moving to Auburn, Nebraska in 1998 served as a pre-school aide at St. John’s Lutheran Church in Tecumseh, Nebraska. As a member of St. Paul’s Lutheran Church in Arlington and Trinity Lutheran Church in Auburn, Marlin was very active in LLL and served in various ways in his church over the years. He helped at SENDS in Auburn and enjoyed woodworking to keep him busy. In his younger years he played shortstop on a fast pitch softball team, and continued to be an avid Yankees and Royals baseball fan. His interest in music resulted in him singing in a barbershop quartet at one time. Joni passed away on April 8, 2012, but Marlin continued to be upbeat and positive even as he battled cancer himself. He passed away on Saturday, December 7, 2013 at UNMC in Omaha, Nebraska at the age of 80 years, 7 months, and 18 days. In addition to his wife Joni and parents, Marlin was preceded in death by his parents-in-law Herman and Fern Moseman, brother Verdell, sister-in-law Mary Snover, brothers-in-law Dale Snover, Marlin Moseman, and Kenneth Moseman, and nephew Gregg Scheer. Marlin is survived by his children and their spouses Judith and Jerry Ruskamp of Auburn; Kendall and Renay Scheer of Omaha; grandchildren Christine and Laura Ruskamp, Riley Anderson, and Robison Scheer; brother Wayne Scheer of Fremont; sisters-in-law Phyllis and husband Jim Peterson of Fremont; Linda Scheer of Fremont; Marlene Moseman of Hooper; Joan Moseman of Wausa; brothers-in-law Clarence and wife Lorraine Moseman of Fremont; Calvin and wife Marian Moseman of Oakland; Duane and wife LaRae Moseman of Hooper; other relatives and many friends. Memorials in lieu of flowers are suggested to the Orphan Grain Train.

The family of Marlin G Scheer created this Life Tributes page to make it easy to share your memories.

Marlin Gene Scheer, one of three sons of Oscar H. and Esther...

Send flowers to the Scheer family.