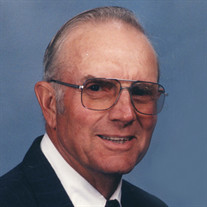 Marvin Dean Biere was born July 22, 1931 in Auburn, Nebraska, one of five boys born to George and Mary (Schmidt) Biere. Marvin was baptized and confirmed into the Lutheran faith at St. Paul Lutheran Church. Through his faith in the Lord Jesus Christ he is now in the presence of God the Father. The Lord blessed him with the love of his life, Evelyn Haddox, in marriage. They were married 67 years and were blessed with two children, Susan and James. Marvin served in the Korean War as a tank mechanic from 1952 to 1954. After Marvin returned, he and Evelyn made their home in Auburn, where they farmed and went into the fertilizer and seed business with his son James and good friend Earl Dettmer. Marvin continued to farm with his son and son-in-law John until he retired. Marvin was a life-long member of St. Paul Lutheran Church where he served as Councilman and Sunday School Superintendent. He was also a 50+ year member of the American Legion Post #23 in Auburn. After Marvin retired, he and Evelyn enjoyed traveling with family and friends. The joy of Marvin’s life though was spending time with the love of his life, Evelyn. Marvin also enjoyed giving tractor rides and playing cards and games with his family. On Thursday, June 27, 2019 Marvin passed away at the University of Nebraska Medical Center in Omaha, Nebraska. He was preceded in death by his parents, brother and sister-in-law Raymond and Norma Biere, brother Harlan Biere, sister-in-law Jean Biere, Evelyn’s parents Vinnie and Egbert, brother-in-law and sister-in-law Floyd and Alice Haddox, and brother-in-law Dean Irland. He is survived by wife Evelyn; daughter Susan and husband John Abrahams; son James and wife Mary; brother Harold of Auburn; Arlan and wife Carolyn of Creston, IA; sisters-in-law Donna Biere and Lucille Irland; grandchildren LeeAnn and husband Richard Warner, Seth Dunn and wife Elizabeth, Jennifer and husband Nick Hyde, Brian Biere, and Nathan Dunn; great-grandchildren Tyler Warner and fiance Ally, Kyson Warner, Jackson Warner, Lena Dunn, Noah Dunn, Esten Hyde, Emma Hyde, Eva Hyde, Grant Dunn, and Christian Dunn. A funeral service will be Monday, July 1, 10:30 a.m. at St. Paul Lutheran Church in Auburn. Burial will follow in Sheridan West Cemetery at Auburn, with graveside military honors provided by American Legion Post #23. Visitation will be at the funeral home Sunday noon to 8:00 p.m., with family greeting friends 6:00 to 8:00.

Marvin Dean Biere was born July 22, 1931 in Auburn, Nebraska, one of five boys born to George and Mary (Schmidt) Biere. Marvin was baptized and confirmed into the Lutheran faith at St. Paul Lutheran Church. Through his faith in the Lord... View Obituary & Service Information

The family of Marvin Biere created this Life Tributes page to make it easy to share your memories.

Send flowers to the Biere family.