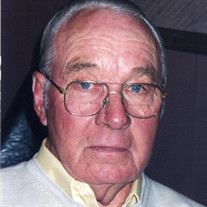 Marvin and his twin sister Marceille were born at the Tushla Hospital in Auburn on July 31, 1932 to D.J. and Freda (Antholz) Caspers. They were baptized by Pastor Wm Frueling on October 13, 1932 at Martin Luther Church. Both were confirmed... View Obituary & Service Information

The family of Marvin D. Caspers created this Life Tributes page to make it easy to share your memories.

Marvin and his twin sister Marceille were born at the Tushla...

Send flowers to the Caspers family.