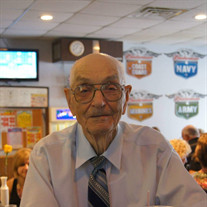 Marvin August Ebeler, one of nine children of Arthur and Elsie (Doeden) Ebeler, was born January 11, 1924 at Unadilla, Nebraska. He attended school in Syracuse, Nebraska, where he graduated from high school in 1942. On October 11, 1945 Marv was inducted into the U. S. Army at Ft. Leavenworth, Kansas. He was honorably discharged on January 7, 1946 and the next day enlisted in the U. S. Air Force at Keesler AFB in Mississippi. After three years with the Air Force Marv was honorably discharged as a Staff Sergeant and entered the Air Force Reserve. He went on active duty from August of 1950 to August of 1951, when he returned to Auburn, Nebraska. Marvin and Phyllis Marie Seid were united in marriage on February 25, 1948 at First Christian Church in Omaha, Nebraska. They would be blessed with four children: Shirley, Paul, Debora, and Elaine. The family lived in several towns in southeast Nebraska, including Nemaha, Burchard, Table Rock and Elk Creek, before settling in Auburn. Marv worked for the railroad for 18 ½ years, serving as depot agent in the towns where he lived. He also farmed with his brother-in-law Frances Seid during his off time. Marv also started doing books for grain elevators in the towns where he was stationed. In 1954 he began his long career as an owner and operator of Auburn Elevator Co. Inc. Even after selling his operation in Auburn he continued to go to his office there on a daily basis. As a 65+ year member of the American Legion and 40 & 8, Marv was very involved in the various posts he served. He was adjutant at the local level and became active at the State level, receiving a citizenship award for his work. He was a longtime member of the Auburn Volunteer Fire Department and had belonged to the Masons Lodge, Elks Lodge, Eagles Aerie. In his spare time Marv was an avid gardener. He loved completing Sudoku and crossword puzzles to “keep his mind sharp”. His favorite phrase was “keep movin” when talking to his family and friends about his life and longevity. On Monday, September 9, 2019, while cleaning some of his crop of potatoes at the Auburn Elevator, Marvin passed away unexpectedly at the age of 95 years, 7 months, and 29 days. He was preceded in death by his parents, his wife Phyllis, and his siblings Art, Eldro “Pete”, Walt, Arlene Schade, Ruth Ann Smith, and Wes. Marvin is remembered lovingly by his children and their spouses Shirley and Charles Hines of Auburn, Paul and Kathy Ebeler of Lincoln, Debbie and Mike McCall of Oakwood, IL, Elaine and Jeff Schnipkoweit of Tecumseh; 9 grandchildren; 14 great-grandchildren; brother David and wife Sharon Ebeler of Silt, CO; sister Velma and husband Daryl Peterson of Stanton, IA; other relatives and friends. A funeral service, officiated by Bob Hemmingsen, was Saturday, September 14, 2019 at Hemmingsen Funeral Home in Auburn. Casket bearers were Nathan Cole, Cade Hines, Adam Huseman, Garret Gerdes, Charles Sharp, and Michael Clark. Honorary bearers were Preston Jones, Christine Sahy, Michelle Allison, Kelsi Huseman, Angela Jones, Amy Sharp, Jennifer Ebeler-Clark, Paula Gerdes, Daissie Hines, and Holly Cole. Burial was in Sheridan West Cermetery, with graveside military honors provided by American Legion Post #23 of Auburn and the U.S. Navy Honors Detail. Memorials are suggested to Auburn Volunteer Fire Department, Auburn Rescue Squad, or American Legion Post #23 of Auburn.

Marvin August Ebeler, one of nine children of Arthur and Elsie (Doeden) Ebeler, was born January 11, 1924 at Unadilla, Nebraska. He attended school in Syracuse, Nebraska, where he graduated from high school in 1942. On October 11, 1945... View Obituary & Service Information

The family of Marvin A. Ebeler created this Life Tributes page to make it easy to share your memories.

Marvin August Ebeler, one of nine children of Arthur and Elsie...

Send flowers to the Ebeler family.