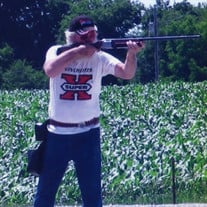 Marvin Marion Rhodus was born August 15, 1942 to Harold and Videl (Gammon) Rhodus in Omaha, Nebraska. After starting school in Blair Marvin’s family moved to Peru, Nebraska. He attended Indian Hill Elementary School in Peru and graduated from Peru Normal. On February 4, 1966, Marvin married Paula Rae Fausett at the Salvation Army post in Omaha, Nebraska where she was active. They were blessed with three children, Tracy Scott, Marva Jean, and Cady and were married for 37 years until Paula Rae’s passing on May 1, 2002. Marv spent his early working years as a deck hand on the Missouri River. He later worked as a millwright on construction jobs, notably traveling to outages at power plants at Brownville, Sutherland, and Nebraska City in Nebraska and also in Kansas. Marv enjoyed the outdoors and being able to hunt, fish, and shoot trap as a sport. He helped for many years with the youth trapshooting group in Rock Port, Missouri. Marv was a member of the Missouri River Rats and was also known for the duck calls he made. Marvin was admitted to Bryan Medical Center West in Lincoln, Nebraska and it was there he passed away on Thursday, May 27, 2021 at the age of 78 years, 9 months, and 12 days. Besides his wife Paula Rae and his parents, he was preceded in death by his infant twin brother Marion Marvin Rhodus. He is survived by his son Tracy Rhodus and Geriann Headrick of Grand Island; daughters and son-in-law Marva Moore of Auburn; Cady and Mike Hoak of Brock; grandchildren Stephanie Wendtlandt and Crystal Rhodus; Katelynne, Logan, and Harley Moore; Jordan, Abigail, and Karrington Hoak; great-grandchildren Aiden, Avery, and Sophia; Taylor, Kellen, Derrick, and Finley; Catalina and Jason; sister Kay (Roger) Livingston of Seattle, WA; cousin Devon Adams of Peru; other relatives and friends. A memorial service will be Monday, June 7, 11:00 a.m. at Hemmingsen Funeral Home in Auburn. Visitation with family will begin one hour prior to the service. A Celebration of Life and luncheon will follow the service at 12:30 p.m. in Peru. Private family burial of ashes will be at a later date in Mt. Vernon Cemetery at Peru. Memorials are suggested to family choice.

The family of Marvin M. Rhodus created this Life Tributes page to make it easy to share your memories.

Send flowers to the Rhodus family.