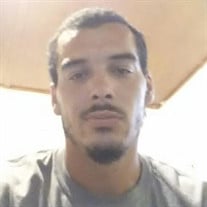 Matthew Ehrick Sciarappa, son of Paul William and Vickie Lynn (Horn) Sciarappa, was born January 4, 1991 in Council Bluffs, Iowa. Matt attended Locust Grove School near Auburn, Nebraska, and graduated from Johnson-Brock High School in 2010. After high school Matt attended Peru State College for a while, and then went to work at the Ariens Company plant in Auburn. In 2014, he joined the crew of Pieters Construction in Auburn, where he continued to be employed. Matt was known both places as a hard worker. He had recently been visiting with a recruiter about joining the United States Marine Corps. Matt attended Trinity Lutheran Church in Auburn at times, and enjoyed reading his Bible. Nicknamed “Mad Dog”, he had many interests, including rapping, playing video games, watching movies, and working out. Matt was sensitive and open-hearted to anyone, and especially loved children. On Sunday, October 23, 2016, Matt passed away in a traffic accident in Nemaha, Nebraska. He had reached the age of 25 years, 9 months, and 19 days. His father Paul, paternal grandparents Nicholas and Audrey, and great-grandparents preceded him in death. Those left to remember fun times with Matt include his mother Vickie of Auburn; siblings and their spouses Paul, Jr. and Tiffany of Port Orange, FL; Michael and Brenda of Port Orange, FL; Maria Addleman and fiancé Christopher Simonson of Bellevue, NE; Linus and Kacie Hendrickson-Sciarappa of Auburn; Nicole Sciarappa of Auburn; twin Joshua Sciarappa of Auburn; grandparents Judith and Steven Horn of Glenwood, IA; nieces, nephews, aunts, uncles, cousins, and many friends. Memorials are suggested to family choice. To view Matthew's funeral service via Livestream: https://livestream.com/accounts/13846112/events/6560055

The family of Matthew "Matt" Sciarappa created this Life Tributes page to make it easy to share your memories.

Send flowers to the Sciarappa family.