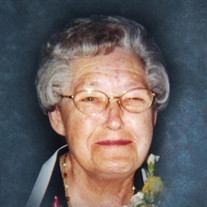 Maxine Caroline (Gerdes) Behrends, one of eight children of John Fredrich and Adele Wilhelmine (Behrends) Gerdes, was born December 21, 1924 at Auburn, Nebraska. She was baptized at St. John Lutheran (Stone) Church February 15, 1925 by Pastor R. Kunzendorf and confirmed Palm Sunday April 2, 1939 by Pastor G. K. Wiencke. On October 11, 1947 Maxine was united in marriage to Alvin Virgil Behrends in Rock Port, Missouri by Pastor L. C. Weitzenkamp. They made their home on a farm near Johnson, Nebraska and were blessed with three daughters: Joan, Lois, and Inez. While on the farm Maxine helped Alvin with the farming and did housework for others. When they moved into Johnson in 1970 the couple did painting, carpentry work, and plumbing. Maxine also looked forward to Saturdays, when she fried chicken and prepared other wonderful food for the White Horse and its customers. Maxine and Alvin joined St. Matthew Lutheran Church after moving to Johnson. She was a member of the WELCA and enjoyed sewing quilts at church. As a member of Johnson American Legion Unit Auxiliary #330 Maxine served as President and Sergeant at Arms. She also belonged to the Red Hatters. When she could no longer live alone in her home in Johnson, Maxine moved to The Kensington assisted living facility in Beatrice, Nebraska. She enjoyed the 3 ½ years she spent there visiting with other residents and staff. On Saturday, October 31, 2020 Maxine passed away at The Kensington at the age of 95 years, 10 months, and 10 days. She was preceded in death by her parents, her husband Alvin, brothers Elmer, Arnold, LaVerne, Raymond and Lloyd; sisters Della Bergmann and Ora Gerdes; sisters-in-law Lucille Gerdes, Hilda Behrends, Arvilla Behrends, Delores Griggs, Shirley Gerdes, Nadyne Gerdes, and Marlene Gerdes; brothers-in-law Orval Behrends, Marlin Behrends, DeLynn Behrends, Joe Griggs, and Harvey Bergmann; and son-in-law Roger Chapman. Those left to mourn her passing include her daughters and sons-in-law Joan Chapman of Brush, CO; Lois and Keith Johnson of Papillion; Inez and Duane Trauernicht of Beatrice; grandchildren and spouses Tony and Terry Behrends, Monty Johnson, Joy and Jason Haake, April Holeton; great-grandchildren Candice and Maxine Johnson, Makayla, Lukas and Annalise Haake, Ashley and Dalton McCubbins; many nieces, nephews, other relatives, and many friends. A funeral service will be Wednesday, November 4, 2:00 p.m. at Hemmingsen Funeral Home in Auburn. Burial will follow in St. Matthew Lutheran Cemetery at Johnson. Visitation will be at the funeral home Tuesday 9:00 a.m. to 8:00 p.m., with family greeting friends 6:00 to 8:00. Watch Maxine's funeral service via Livestream at: https://livestream.com/accounts/13846112/events/9384255 Memorials are suggested to St. Matthew Lutheran Church or The Kensington.

The family of Maxine C. Behrends created this Life Tributes page to make it easy to share your memories.

Maxine Caroline (Gerdes) Behrends, one of eight children of John...

Send flowers to the Behrends family.