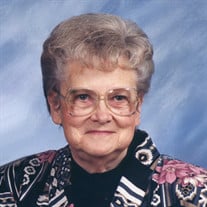 Maxine Hulda Knippelmeyer, the only child of Elmer and Letha (Alberts) Volker, was born March 20, 1928 in rural Nemaha County, Nebraska. She was baptized April 15, 1928 and confirmed October 25, 1942 at St. James Lutheran (Long Branch) Church near Humboldt, Nebraska. Maxine attended Prairie Hill District #46 also known as Volker School near her home through the 8th grade. On October 20, 1948 Maxine was united in marriage to Erhardt Knippelmeyer at St. James Lutheran Church. They lived in Auburn and Johnson, Nebraska before moving to family farm, and were blessed with two children, Steve and Vicki. Erhardt and Maxine received the Pioneer Farm Family Farm Award for both the Volker and Knippelmeyer family farms. Maxine worked at the JM McDonald Department Store in Humboldt and continued working at the store as it became Leech’s Department Store. She worked for over 39 years at the two stores. Later in life Maxine worked at Village Designs in Auburn. As a lifelong member of Long Branch Church, she and Erhardt attended church faithfully. Maxine, along with Erhardt, belonged to the Auburn Eagles Club. On the farm she gardened and raised chickens. She did crochet and embroidery and tied 100’s of blankets for gifts and charity. Maxine liked to work puzzles in her spare time, but mostly she enjoyed attending ball games when her children and grandchildren were playing. Erhardt passed away in 2001, after more than 52 years of marriage for the couple. Maxine continued to live at home for a time until becoming a resident of Long’s Creek Assisted Living in Auburn. She very much enjoyed the fellowship and friendships she made at Long’s Creek. When her health made it necessary Maxine moved to the Good Samaritan Society-Auburn early in January of 2020. It was there she passed away, with family around her, on Friday, January 31, 2020 at the age of 91 years, 10 months, and 11 days. In addition to her husband and her parents, Maxine was preceded in death by her son-in-law Mac Erisman. Maxine will be remembered lovingly by her son and daughter-in-law Steve and Nancy Knippelmeyer of Auburn; daughter Vicki Erisman of Auburn; grandchildren Ryan and Sommer Knippelmeyer; Misy and Terry Fulton; Angi Klein; great-grandchildren Eva and Knox Knippelmeyer; Libby, Colter, Brianna, Sophia, Isabelle, Nina, Kelby, and Vaeda Fulton; Cloe and Cole Klein; other relatives and friends. A funeral service will be Tuesday, February 4, 10:30 a.m. at St. James Lutheran (Long Branch) Church near Humboldt. Burial will follow in the church cemetery. Visitation will be at the funeral home Monday 9:00 a.m. to 8:00 p.m., with family greeting friends 5:00 to 6:00. In lieu of flowers, memorials are suggested to family choice.

The family of Maxine Knippelmeyer created this Life Tributes page to make it easy to share your memories.

Maxine Hulda Knippelmeyer, the only child of Elmer and Letha...

Send flowers to the Knippelmeyer family.