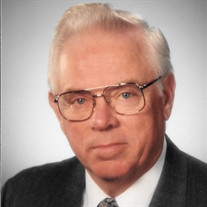 Melvin “Buzz” Floyd Rumbaugh, 93, of Grand Island, NE, passed away on Friday, January 17th, 2020 in Apache Junction, Arizona. Buzz had chosen to be cremated. A service to celebrate his life will be held on June 13th, 2020 at 10:30 AM at Hemmingsen Funeral Home in Auburn, Nebraska. Interment will follow at Bedford Cemetery where he will receive military honors. Due to Covid19, current restrictions will be observed. Visitors will need to follow the 6-foot social distancing guidelines with households that live together being allowed to sit together. A receiving line or luncheon will not be held. Melvin was born March 19th, 1926, to Everett and Anna Rumbaugh on the family farm near Howe, Nebraska. On August 22nd,1948, he was united in marriage to Shirley May Matschullat. They had two daughters, Charice and Beth. Shirley passed away on May 28th, 2004. On November 17, 2007, he remarried Norma Jean Bender. Buzz served in WWII from 1944-1946 in the Air Force as a Corporal Engineer Gunner in Germany. After the war, Buzz attended the University of Nebraska-Lincoln Business Administration College and was also a graduate of the LP Gas Institute in Tulsa. With his father, he started a propane gas company in Auburn which was sold to Northern Natural Gas. He then went to work for Northern Natural Gas in Nebraska and Florida for 14 years. In 1975, he purchased Brown Auto Parts Stores in Grand Island and Central City. He also began Concept Fiberglass Homes. Concept made fiberglass round houses, showers, storage containers and other custom designs. In addition, Buzz owned a number of storage units in Grand Island. He continued with his fiberglass business until his retirement in1994. Buzz was involved in a number of organizations including the American Legion (past commander), VFW, and Chamber of Commerce where he was nominated as small business of the year in 1989. He was a member of the Nebraska Home Builders Association and served on the board of directors and was President of Central Nebraska Home Builders in1987. Buzz was also active as a director of FFA and worked with schools around the USA during that same time period. His hobby became his passion, and he was a lifetime member of the Nebraska Numismatic Association and served as its president in 2003 and 2004. Buzz was a member of Riverside Golf Club and St. Paul Lutheran Church. In 2012, he participated in the Hall County Hero Flight to Washington DC to visit our nation’s memorials. He is preceded in death by his parents; wife, Shirley; and four siblings, Harold Rumbaugh, Madeline Musick, Norma Apple, and Anna Mae Peterson. Survived by wife, Norma Jean; daughters Larry and Charice Nyffeler of Omaha, Steve and Beth Reinsch of Omaha; seven grandchildren, Brandon and Dani Nyffeler, Reed and Dana Nyffeler, Greg and Cristy Nyffeler, Jennifer (Nyffeler) and Brian Conklin, Sarah Reinsch, Matthew and Jessica Reinsch, Laura (Reinsch) and Brandon Videtich, and 18 great-grandchildren. Memorials are suggested to Bedford Cemetery.

The family of Melvin "Buzz" Floyd Rumbaugh created this Life Tributes page to make it easy to share your memories.

Send flowers to the Rumbaugh family.