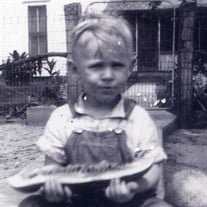 Mervin Robert Geyer, only child of Robert and Lillie (Fritsch) Geyer, was born August 20, 1929 at Auburn, Nebraska. He was baptized September 15, 1929 by his grandfather Rev. E.F. Geyer and confirmed October 25, 1942 by Rev. H. Bents, both at St. James Lutheran (Long Branch) Church near Humboldt, Nebraska. Mervin attended Bratton Union School, graduating in 1947. He learned the value of hard work and money during summers of his high school years on a neighbor’s Case hay baler. Mervin served in the Nebraska National Guard from 1950 to 1956. On June 26, 1952 He was married to Wilma Bohling at St. Paul Lutheran (Hickory Grove) Church by Rev. Kolm. Their marriage was blessed with three children: Lynn M., Jana, and Elisabeth, and would last 67 years. Mervin was a lifelong farmer, raising grains, hay, and livestock. He served many years on the Bratton Union School Board and was a member of American Legion Post #269 in Humboldt. As a lifelong member of St. James Lutheran Church, Mervin served in various Church Council positions. Mervin loved his family and friends. He was also very fond of flowers, Christmas decorations, and the St. Louis Cardinals. He was proud of the fact that he had donated 166 pints of blood to the American Red Cross through the years. After receiving a cancer diagnosis in 2016 Mervin battled the disease while being able to stay at his home. His wife Wilma, children and grandchildren were instrumental in helping make his wish to stay home a reality. He passed away at home, with family around him, on Thursday, February 20, 2020 at the age of 90 years and 6 months. He was preceded in death by his parents, brother-in-law Vern and wife Carol Bohling, and sister-in-law Berneice Boeck. Mervin is survived by his wife Wilma; son Lynn Geyer of Humboldt; daughters Jana Anderson of Stella, Beth and husband Deon Griffith of Topeka, KS; grandchildren and spouses Dustin and Darcy Anderson, Dru Anderson, Lucas Geyer, Cassidy and Billy Lotter, Lacee and Adam Noa; great-grandchildren Chaelee, Brynlee, Quinn, and Everly; sisters and brothers-in-law Vera and Richard Plager of Humboldt, Marlene and Eiber Alberts of Auburn; brother-in-law Evert Boeck of Smith Center, KS; nieces, nephews, other relatives and friends. A funeral service will be Tuesday, February 25, 10:30 a.m. at St. James Lutheran (Long Branch) Church near Humboldt. Burial will follow in the church cemetery with graveside military honors by American Legion Post #269 of Humboldt and Nebraska National Guard Honors Detail. Visitation will be at the funeral home Monday 10:00 a.m. to 8:00 p.m., with family greeting friends 6:00 to 8:00. Memorials are suggested to Richardson County Cancer Fund.

Mervin Robert Geyer, only child of Robert and Lillie (Fritsch) Geyer, was born August 20, 1929 at Auburn, Nebraska. He was baptized September 15, 1929 by his grandfather Rev. E.F. Geyer and confirmed October 25, 1942 by Rev. H. Bents, both... View Obituary & Service Information

The family of Mervin R. Geyer created this Life Tributes page to make it easy to share your memories.

Mervin Robert Geyer, only child of Robert and Lillie (Fritsch)...

Send flowers to the Geyer family.