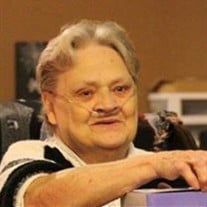 Micklyn Lee (Mott) Chapin was born October 9, 1949 in Beatrice, Nebraska. She was one of three children of William and Donna (Arnold) Mott. Mickey attended school in Beatrice and at North High School in Omaha, Nebraska. On December 26, 1969, Mickey was united in marriage to Larry Chapin, Sr. at the Douglas County Courthouse in Omaha. Their union was blessed with four children: Larry Lee, Jr. ”Bud”, Billy Lee, Bobby Lee, and Crystal Gail. The couple later divorced, but remained friends. Mickey spent her married years as a homemaker, raising her children and running the household. In her later years, her life was centered around her grandkids. She loved to have the grandkids come over, and when she lived in the High Rise across from the Auburn pool she would sit outside watching for her grandchildren to leave the pool so she could invite them and their friends in for treats. She also enjoyed taking care of her grand-dogs and even Rex the guinea pig when family was out of town. Mickey was a big Husker fan, and loved to talk wrestling and watch it on TV. She made friends wherever she went, and enjoyed visiting with her neighbors at the High Rise (almost always with a cup of coffee in her hands). Larry’s father, Bill, was one person in particular Mickey enjoyed “hanging out with”. When her children were still at home, favorite pastimes of hers were going camping and fishing with the family. In November of 2016 Mickey became a resident of the Good Samaritan Society-Auburn. She passed away there on Monday, January 23, 2017, at the age of 67 years, 3 months, and 14 days. Her parents, brother and sister, and son Bobby Lee preceded her in death. Mickey is survived by her children and their spouses Larry, Jr. “Bud” and Diane Chapin of LaVista; Bill and Megan Chapin of Auburn; Crystal and Brian Lavigne of Auburn; 9 grandchildren; 4 great-grandchildren; former husband Larry Chapin, Sr. of Brownville; special close friend Heather Chapin of Auburn; nieces, nephews, other relatives and many friends. Memorials are suggested to family choice.

Micklyn Lee (Mott) Chapin was born October 9, 1949 in Beatrice, Nebraska. She was one of three children of William and Donna (Arnold) Mott. Mickey attended school in Beatrice and at North High School in Omaha, Nebraska. On December 26,... View Obituary & Service Information

The family of Micklyn "Mickey" Chapin created this Life Tributes page to make it easy to share your memories.