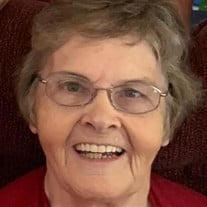 Myrna Coleen (Chandler) Georges, one of four children of Raymond and Gladys (Boatman) Chandler, was born January 23, 1941, at the family home in rural Nemaha County, Nebraska. Myrna grew up and attended school in Nemaha County. Myrna was united in marriage to Albert Dale Georges, Jr. The couple would be blessed with three children: son Terry and daughters Vickey and Julie. The couple would later divorce. Myrna spent her life taking care of others, from raising her family to working at the Good Samaritan Society in Auburn. She was very devoted to her faith and centered her life around her religion, Jehovah’s Witnesses. Myrna’s family, especially her grandkids, meant the world to her. When she was no longer able to stay at home, Myrna became a resident at Good Samaritan Society-Auburn. It is there that she passed away on Friday, March 25, 2022, having reached the age of 81 years, 2 months, and 2 days. She was preceded in death by her parents, and 3 brothers Donald, Edward, and Barton. Those left to remember her loving ways include her son Terry (Margie) Georges of Auburn; daughters Vickey (Jerry) Simpson of Claremore, OK, Julie (Sheila) Georges of Nebraska City; 17 grandchildren; 34 great-grandchildren; 2 great-great-grandchildren; other relatives and friends. A graveside memorial service will be held Friday, April 1, 2022, 10:30 a.m. at Prairie Union Cemetery near Shubert.

The family of Myrna Coleen (Chandler) Georges created this Life Tributes page to make it easy to share your memories.

Myrna Coleen (Chandler) Georges, one of four children of Raymond...