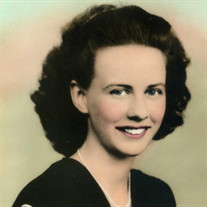 Nadene Bergmann, daughter of Daniel W. Lang and Lucy A. Hunt Lang, was born November 2, 1929, on a farm in the Island Precinct in Nemaha County near Hamburg, Iowa. She was the youngest of eight children. She attended the Island School and Hamburg High School. In 1945, her family moved to a farm near Auburn, Nebraska. After graduation from Auburn High School in 1947, she attended Peru State College where she received a teaching certificate. She taught at Roosevelt School near Johnson, Nebraska, the year prior to her marriage to Julius H. Bergmann on May 23, 1948, in the Church of Christ in Auburn. Following their marriage, they moved to a farm southeast of Auburn, where together they made their home for 53 years. The couple had two children, Ronald and Pamela. Following Julius’ passing in 2000, Nadene continued living on the farm until moving to Ambassador Health in Nebraska City in 2015. Nadene joined St. Paul Lutheran Church in Auburn after her marriage to Julius, where they were members for many years. In 1983, she and Julius joined the Auburn Berean Church, where she assisted Julius as Church Treasurer for 16 years. Nadene will be remembered for her devotion to her family and husband Julius, strong work ethic, love of travel, and sense of adventure. Nadene passed away on October 22, 2020 at the age of 90 at Ambassador Health in Nebraska City. She was preceded in death by her parents, husband, three brothers (Walter, Lee, and Claude Lang), four sisters (Mildred Hayes, Theta Lester, Iris Rhoads, and Inez Collins), and great-grandson (Ashtyn Bergmann). Nadene is survived by her son Ronald of Auburn and wife Lisa; daughter Pamela Bergmann of Anchorage, Alaska, and spouse John Duffy; six grandchildren; nine great-grandchildren; and other relatives and friends. A celebration of life service will be held Monday, October 26, 2020, 10:00 a.m., at the Auburn Berean Church in Auburn. Burial will follow in Sheridan Cemetery at Auburn. Visitation will be at Hemmingsen Funeral Home in Auburn on Sunday from noon to 8:00 p.m., with family greeting friends from 6:00 to 8:00. Memorials are suggested in lieu of flowers to Tabitha Hospice. To view Nadene's service live click on this link: https://www.facebook.com/AuburnBereanChurch/

Nadene Bergmann, daughter of Daniel W. Lang and Lucy A. Hunt Lang, was born November 2, 1929, on a farm in the Island Precinct in Nemaha County near Hamburg, Iowa. She was the youngest of eight children. She attended the Island School and... View Obituary & Service Information

The family of Nadene Bergmann created this Life Tributes page to make it easy to share your memories.

Send flowers to the Bergmann family.