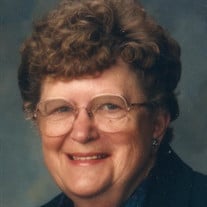 Nadyne Erma (Alberts) Gerdes was born February 7, 1932 on the family farm near Humboldt, Nebraska. She was one of two daughters of Eddie and Erma (Tjaden) Alberts. Nadyne was baptized March 27, 1932, and confirmed October 14, 1945, both at St. James Lutheran (Long Branch) Church near Humboldt. She attended Greenfield rural school, and graduated from Humboldt High School in 1949. Nadyne then attended Peru State Teachers College and earned her teaching certificate. While teaching rural school, Nadyne met Raymond Gerdes while she was living in his parents’ home. Nadyne and Raymond were united in marriage May 31, 1951 at Long Branch Church. They made their first home in rural Pawnee County, Nebraska, and would be blessed with four children: Kathy, Gary, Pamela, and Laurie. After her marriage, Nadyne devoted herself to running the household and raising her children. After she and Ray purchased his family’s farm near Humboldt and moved there, she also helped with the farming operation. As a lifelong member of St. James Lutheran Church, Nadyne was very active in church affairs. She held numerous positions within the church, including being a member of Mary-Martha Circle and teaching Sunday school and Vacation Bible School. She was also very involved with ALCW, serving as conference President and attending National and Regional conventions. Nadyne enjoyed playing cards, and she belonged to the Sunshine Circle Club. She loved to bake, and made all the cakes for her grandchildren’s special occasions, such as birthdays, confirmations, and graduations. Her family will always remember her skinny pancakes and knip, always a favorite. After Ray’s passing in November of 2012, Nadyne moved to a house in Auburn for a while. She then entered Long’s Creek Assisted Living until becoming a resident of Belle Terrace in Tecumseh. It was there, on Saturday, November 12, 2016, she passed away, having reached the age of 84 years, 9 months, and 5 days. In addition to her parents and her husband, Nadyne was preceded in death by her son Gary and daughter Pamela. Those left with fond memories of Nadyne include her daughters and sons-in-law Kathy and Bob Grotrian of Humboldt; Laurie and Dale Piper of Springfield; grandchildren and spouses Bobbi and Steve Tegtmeier; Ryan and Kim Grotrian; Kerri and Brian Lambert; Clint and Gina Piper; Adam and Amber Piper; great-grandchildren Derek Tegtmeier, Dylan and wife Jenae Tegtmeier; Sayge and Sawyer Grotrian; Ainslee and Greyson Lambert; Isabella, Colton and Avery Piper; Owen and Madisyn Piper; sister Betty Rogge of Ridge Crest, CA; other relatives and friends. A funeral service was held Thursday, November 17, 2016 at St. James Lutheran (Long Branch) Church, officiated by Revs. Amalia and Eric Spruth-Janssen. Carolyn Hahn was organist and accompanist for congregational hymns. Casket bearers Ryan Grotrian, Clint Piper, Adam Piper, Steve Tegtmeier, Brian Lambert, Derek Tegtmeier, Dylan Tegtmeier, Colton Piper, Greyson Lambert, and Owen Piper. Flower attendants were Bobbi Tegtmeier, Kerri Lambert, Kim Grotrian, Gina Piper, Amber Piper, Jenae Tegtmeier, Sayge Grotrian, Sawyer Grotrian, Ainslee Lambert, Isabella Piper, Avery Piper, and Madisyn Piper. Burial was in the church cemetery.

Nadyne Erma (Alberts) Gerdes was born February 7, 1932 on the family farm near Humboldt, Nebraska. She was one of two daughters of Eddie and Erma (Tjaden) Alberts. Nadyne was baptized March 27, 1932, and confirmed October 14, 1945, both... View Obituary & Service Information

The family of Nadyne E. Gerdes created this Life Tributes page to make it easy to share your memories.

Send flowers to the Gerdes family.