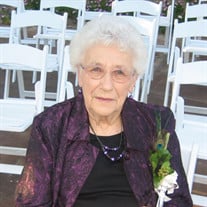 Norma Maxine (Hahn) Bray, daughter of Ed F. and Gertrude (Boellstorff) Hahn, was born on August 13, 1926, in Johnson County, Nebraska. Norma attended Cherry Grove Country School and graduated from Johnson High School in 1944. She received a teaching certification from Peru State College and subsequently taught at Cherry Grove Country school for five years. Norma was baptized at the Auburn Christian Church on April 8, 1945. On November 27, 1949, she was united in marriage to Leonard Bray at the Charter Oak Christian Church in Talmage, Nebraska. They were blessed with four children: Sterling, Gary, Sharon, and Jeanne. Norma and Leonard made their home on a farm northwest of Johnson. Leonard passed away on January 2, 1997. Norma remained on the farm until 2002 when she moved to a home in Johnson. Norma was a lifetime member of Charter Oak Christian Church in Talmage. She served on the church board for many years and also belonged to the Ladies Aid. She was a member of the Johnson Extension Club for several years. Norma was a farm wife and enjoyed raising a garden and canning. She had a green thumb and grew beautiful plants and flowers. Norma enjoyed quilting and knitting and made many beautiful quilts and blankets for her children and grandchildren. She enjoyed camping and birdwatching. Norma was a wonderful cook; some of the family favorites were her cinnamon rolls, fried chicken, and chocolate cake. Norma’s family meant the world to her. She loved spending time with her grandchildren and great-grandchildren and following their activities. Norma passed away on January 11, 2022, at the High Plains Care Center in Lincoln, Nebraska, having reached the age of 95 years, 4 months, and 29 days. She was preceded in death by her parents, husband Leonard, sisters Edna DeJonge and Darlene O’Brien, sister-in-law Alma Eckert, and brothers-in-law Tom O’Brien and Virgil Eckert. Norma is survived by her children and their spouses Sterling and Elaine Bray of Auburn, Sharon and Dwight Wander of Syracuse, Gary and LuAnn Bray of Johnson, Jeanne and Kevin Benes of Gibbon; grandchildren Scott (Victoria) Bray, Ryan (Janelle) Bray, Tami (Tyler) Hartley, Kelly (Lee) Rasmussen, Jeremy (Amy) Wander, Nichole (Josh) Hurst, Sarah Benes, Michaella (Brett) Bendfeldt,; great-grandchildren River, Ridge, Emily and Nicholas Bray, Mia and Kendall Hartley, Halle, Gage and Lexi Rasmussen, Owen, Carter and Liam Wander, Adelynn, Kinley, and Emery Hurst, and Maeli Bendfeldt; brother-in-law Ed DeJonge; longtime friend Janet Eckert; nieces, nephews, friends, and neighbors. A memorial service will be Monday, January 17, 10:00 a.m. at Hemmingsen Funeral Home in Auburn. Burial of ashes will follow at the Johnson Cemetery. Visitation will be at the funeral home in Auburn Sunday noon to 6:00 p.m., with family greeting friends 3:00 to 5:00. Memorials are suggested to family choice. To view Norma's service click on the following link: https://livestream.com/accounts/13846112/events/10088120

The family of Norma Bray created this Life Tributes page to make it easy to share your memories.

Send flowers to the Bray family.