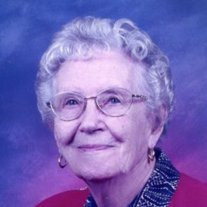 Opal K. Bohl was born September 16, 1914 on a farm near Hanover, Iowa. She was one of four children of George and Orie Theresa (Tegeler) Rogge. Opal was baptized November 1, 1914 at St. John’s Lutheran Church in Hanover and confirmed at St. Paul Lutheran Church in Auburn. She received her early education in Storm Lake, Iowa and Pipestone, Minnesota. When her family moved to Nemaha County, Nebraska in 1928 Opal attended Grand Prairie District #20 and graduated from Auburn High School in 1933 with a certificate to teach in rural schools. In 1966 she graduated from Peru State College with a degree in education. On September 15, 1934 Opal was married to Lyle Bohl in the St. Paul Lutheran Church parsonage. The couple settled in the Howe community, where they raised their three children Philip, Joan, and James. After Lyle’s death in 1992 Opal lived on the farm until 1997, when she moved into Auburn. Opal taught for thirteen years in rural schools in Nemaha County, and then taught 2nd Grade at Southeast Consolidated Schools for another thirteen years until her retirement in 1980. She belonged to local, state, and national teachers associations and had served as President of the Richardson County Teachers Association. Opal was a member of the Howe Methodist Church from 1935 until its closing in 1991, when she transferred her membership to First United Methodist Church in Auburn. She belonged to United Methodist Women, Delta Kappa Gamma, Auburn Eagles Auxiliary, and the Knic Knac Club. She also helped organize and served 12 years as Secretary-Treasurer of the Nemaha County Handi-Bus Committee. Opal passed away on Sunday, September 22, 2013 at Lancaster Manor in Lincoln, Nebraska, at the age of 99 years and 6 days. In addition to her husband Lyle and her parents, Opal was preceded in death by her infant brother and sisters Bernice Myers and Fern Allgood. Those left to mourn her passing include her sons and daughters-in-law Philip and Roberta Bohl of Lincoln; James and Sharon Bohl of Lincoln; daughter and son-in-law Joan and Lorin Toman of Omaha; grandchildren and spouses Craig and Leia Bohl, Lisa and Steve Olson, Mark Toman, Susan Craft, Jason Bohl, Jennifer and Chris Swanson; 13 great-grandchildren; sister Lois Hinzman of Norfolk; sister-in-law Shirley Eikmeier of Minneapolis, MN; cousin Wilma Wellner of Springfield, MN; other relatives and many friends. A funeral service will be Thursday, September 26, 10:30 a.m. at First United Methodist Church in Auburn. Burial will follow in Bedford Cemetery near Howe. Visitation will be at the funeral home Wednesday 9:00 a.m. to 8:00 p.m., with family greeting friends 6:00 to 8:00. Memorials are suggested to Bedford Cemetery or First United Methodist Church.

Opal K. Bohl was born September 16, 1914 on a farm near Hanover, Iowa. She was one of four children of George and Orie Theresa (Tegeler) Rogge. Opal was baptized November 1, 1914 at St. John&#8217;s Lutheran Church in Hanover and confirmed... View Obituary & Service Information

The family of Opal K. Bohl created this Life Tributes page to make it easy to share your memories.

Send flowers to the Bohl family.