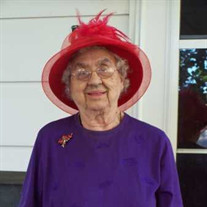 Ora Zerline (Torbeck) Eltiste was born on a farm southeast of Johnson, Nebraska to Fred W. and Kathrena (Nordbrock) Torbeck on October 25, 1918. She was baptized at St. John Lutheran (Stone) Church near her home by Rev. Pett and confirmed into the Lutheran faith March 23, 1932 at the Stone Church by Rev. Kunzendorf. Ora attended District 42 School and Johnson Public School. She grew to womanhood in the Stone Church neighborhood and taught Sunday school for many years at the church. In June of 1942 Ora traveled to California, where she met her fiancé Kiel E. Eltiste, who was serving in the U.S. Army. They eloped to Las Vegas, Nevada and were married June 21, 1942 by Rev. Dunn. To this union four children were born: Kiel Ora, Pamela, Lonnie and Hal. After their marriage they settled in Hollywood, California where Kiel was stationed at various camps and she worked at Prospect Pharmacy. After her husband’s discharge from the Army in November of 1945 they returned to Nebraska and settled on the farm near Johnson where Kiel was born. Ora helped with farm work, and also was a Home Demonstrator for Stanley Home Products, serving in that capacity for 35 years. She transferred her church membership to St. Matthew Lutheran Church in Johnson and again became active in Sunday school, teaching for many years. Ora would never miss fixing a food dish for any church activity that came around. In 1986 she became treasurer of the Combined Johnson Community Sunday School and held that position for many years. After her husband’s health began to fail, the couple moved from the farm into Johnson, where they lived for many years. They were privileged to celebrate 58 years of marriage. Ora was a grandma and great-grandmother to many little ones, all of whom enjoyed the blankets she made for them and the sugar cookies always ready at her house. She was stricken with a severe heart attack in 1990, but was able to recover to be able to perform her daily chores. Ora was very active in the community. She was a continuing member of American Legion Post #330 Auxiliary for almost 50 years. She volunteered with the Johnson Rag, working right up until the time she broke her hip in January of 2013. She enjoyed playing cards, and was a member of the Johnson Red-Hatters. She also served as a director on the Nemaha County Hospital Board for nine years. After the fall that broke her hip, Ora became a resident of the Good Samaritan Society-Auburn. She enjoyed her time there, especially playing bingo and having her nails done. It was there she passed away, on Wednesday, August 6, 2014, at the age of 95 years, 9 months, and 8 days. She was preceded in death by her parents, husband Kiel, and two sisters. Ora is survived by her children and their spouses Kiel and Barb Eltiste of Fremont; Pamela and David Muse of Auburn; Lonnie and Jane Eltiste of Lincoln; Hal and Fran Eltiste of Peru; 9 grandchildren and 8 step-grandchildren; 16 great-grandchildren and 17 step-great-grandchildren; sister Opal Eltiste of Vesta; many other relatives and friends.

Ora Zerline (Torbeck) Eltiste was born on a farm southeast of Johnson, Nebraska to Fred W. and Kathrena (Nordbrock) Torbeck on October 25, 1918. She was baptized at St. John Lutheran (Stone) Church near her home by Rev. Pett and confirmed... View Obituary & Service Information

The family of Ora Z. Eltiste created this Life Tributes page to make it easy to share your memories.

Send flowers to the Eltiste family.