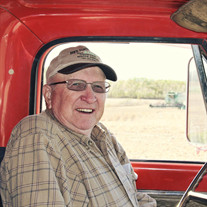 Paul Carl Grotrian, one of five children of Carl and Leona (Brehm) Grotrian, was born November 30, 1934 on the family farm southwest of Cook, Nebraska. Paul was baptized January 13, 1935 at St. Paul Lutheran Church near Talmage, Nebraska by Pastor Paul Mall, and confirmed at St. Paul’s also. He attended school in Talmage, where he graduated from high school in 1952. On August 14, 1955, Paul was united in marriage to Dolores Harms at St. John’s Lutheran Church in Sterling, Nebraska. Their union was blessed with five children: Arlen, Lori, Linda, Jim, and Kathy. Paul was a farmer through and through, from a young man until late in life. In addition to raising various crops, he also had a cow/calf operation for many years. He had a real love for nature that influenced him in many activities and decisions. Although he loved to farm, Paul understood that recreation time was important as well. He enjoyed going on family trips, especially the annual “Grandma and Grandpa Trips” with the grandchildren. He loved hunting, fishing, trapping, throwing horseshoes, and playing checkers. He was hard to beat at the two latter activities. Paul had coon dogs for a good part of his life, and enjoyed the sport with his father, brothers, and sons. He and Dolores belonged to a card club in Nebraska City for 50 years, and in later years they enjoyed “going South” to the casinos. A favorite tradition of his was running the family bingo games at Christmas time each year. In addition to his membership in St. Paul Lutheran Church early in life, Paul also belonged to Zion Lutheran Church near Johnson, and later transferred to Martin Luther Lutheran Church south of Johnson. He served on church council several terms, and in various positions within the council. Paul also sang in the church choir and for weddings and funerals. He had served as President of the Talmage Farmers’ Co-op as well. On September 28, 2017, Paul was admitted to the Johnson County Hospital in Tecumseh, Nebraska. It was there, with family around him, that he passed away on Sunday, October 1, 2017, at the age of 82 years, 10 months, and 1 day. In addition to his parents Carl and Leona, Paul was preceded in death by his daughter Kathy, son-in-law Stanley Post, sister Loretta Teten, brothers Donald and Glen, parents-in-law Harm and Evalene (Sargent) Harms, brothers-in-law Carl Teten and Donald Wellman, and sister-in-law Darlene Grotrian. Paul’s faith and trust in God never wavered throughout his life or his short illness. The way he lived his life and the way he left this world was a great example to his family. Paul will be remembered for his smile and his kind and gentle nature. He found so much happiness in his family, treasured each and every one of them, and was so very proud of them all. Loved ones that will miss Paul until they meet again are his wife of 62 years Dolores; children and their spouses Arlen and Kathie Grotrian of Johnson; Lori and Craig Behrends of Auburn; Linda Post of Syracuse; Jim and Lisa Grotrian of Plattsmouth; grandchildren Blayne, Michael, Stacy, Andy, Joel, Tracie, Ryan, Adam, and Eric; great-grandchildren Jalen, Brooklyn, Lauren, Reese, Addison, Ella, Joscelyn, Lleyton, Quentin, Mason, Rowen, Calvin, Rylie, Baker, Kyler, Audrey, Ethan, and number 18 due in November; sister Lois Wellman of Auburn; sister-in-law Viola Grotrian of Auburn; many loving nieces, nephews, cousins, other relatives and friends. A funeral service will be held Thursday, October 5, 2017, 10:00 a.m., at Martin Luther Lutheran Church south of Johnson, officiated by Rev. Ken Tubbesing. Martin Luther Lutheran Church Choir will provide special music for the service accompanied by Joan Bohling. Burial will follow at Zion Lutheran Cemetery north of Johnson. Casket bearers will be Blayne Behrends, Michael Behrends, Terry Benham, Andy Grotrian, Joel Grotrian, Eric Beethe, Ryan Post, Adam Post, and Eric Post. Stacy Benham, Bonnie Behrends, Daleen Behrends, Tracie Beethe, Amber Grotrian, Ann Post, Emily Plautz, and Sarah Post will serve as honorary bearers. Memorials are suggested to family choice.

The family of Paul C. Grotrian created this Life Tributes page to make it easy to share your memories.

Paul Carl Grotrian, one of five children of Carl and Leona (Brehm)...