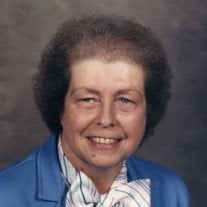 Pearl Emma (Stutheit) Steffens, daughter of Julius H. and Augusta S. (Hogrefe) Stutheit, was born June 23, 1926 on a farm south of Johnson, Nebraska. She was baptized July 4, 1926 and confirmed June 25, 1939 at Stutheit Church. Pearl attended Stutheit School near her home. On August 13, 1950, Pearl was united in marriage to Elmer F. Steffens at Trinity Lutheran Church in Auburn, Nebraska. They made their home on a farm between Johnson and Auburn, and were blessed with three children: James, Shirley, and Linda. In January of 1992 Pearl and Elmer moved into Auburn. Before her marriage Pearl worked as a nanny, a waitress, and in a grocery store in Auburn. After the wedding, she concentrated on running the household, helping on the farm, and raising her family. Pearl became a member of St. Paul Lutheran (Hickory Grove) Church, and was very active in Priscilla Circle. She belonged to American Legion Auxiliary Post #330 in Johnson, and had served as a 4-H Leader with the Hickory Grove Club. Pearl enjoyed quilting, cross stitch, and other handcrafts, as well as gardening. She was a member of a card club, an avid Kansas City Royals baseball fan, and liked to watch game shows on television. After Elmer passed away in 1994, Pearl continued to live at their home in Auburn for another 18 years. She moved to Long’s Creek Assisted Living in Auburn in 2012, and became a resident of the Good Samaritan Society-Auburn in February of 2013. In February of 2014 Pearl was rushed to Bryan LGH West Medical Center in Lincoln, Nebraska. It was there she passed away on Sunday, February 16, 2014 at the age of 87 years, 7 months, and 24 days. In addition to her husband and her parents, Pearl was preceded in death by her brothers Paul and Herbert and sister Alice Rogge. Those left to mourn her passing include her children James and wife Holly Steffens of Auburn, Shirley Steffens of Maryville, MO, Linda and husband Tom Baumert of Lincoln; grandchildren Kerri and husband Alex Tuttle of California, MO, Evi and husband Ralph Wusk of Sterling, Katie and Alex Baumert of Lincoln; great-grandchild Charli Jane Wusk (and one on the way); sisters-in-law Wilma Stutheit of Omaha, Mildred and husband Cornelius DeJonge of Atchison, KS; brother-in-law Eldor Fruehling of Prairie du Sac, WI; other relatives and many friends. A funeral service will be held Thursday, February 20, 11:00 a.m. at St. Paul (Hickory Grove) Lutheran Church near Auburn. Burial will follow in the church cemetery. Visitation will be at the funeral home in Auburn Wednesday 9:00 a.m. to 8:00 p.m., with family greeting friends 6:00 to 8:00. Memorials are suggested to Hickory Grove Church, Carol Joy Holling Camp, or American Diabetes Association.

The family of Pearl Steffens created this Life Tributes page to make it easy to share your memories.

Send flowers to the Steffens family.