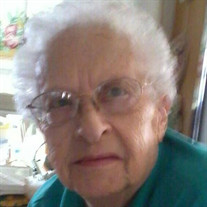 Phyllis Marie Seid, one of four children of Delbert Huber and Ruby Erma (Smith) Seid, was born March 11, 1927 in Auburn, Nebraska. She attended Bell School near her home, and then graduated from Nemaha High School in 1944. She also attended the Nemaha Christian Church as a young girl. On February 25, 1948 Phyllis was united in marriage to Marvin August Ebeler at the First Christian Church in Omaha, Nebraska. They would be blessed with four children: Shirley, Paul, Debbie, and Elaine. The couple’s first home was in Auburn, but they moved 18 times in their first 18 years of marriage before settling back in Auburn in 1967. Phyllis wasn’t the type to stay at home during the early years of her marriage, so she had many jobs as the couple moved around the country. She served with the U.S. Civil Service Commission in Washington, D.C., and in southeast Nebraska worked for Bernard Real Estate, the Burlington Railroad, the Nemaha County Extension Office, and as manager of the South Auburn Elevator. While in Table Rock, Nebraska, Phyllis was a member of Olivette Chapter 83 of the Order of the Eastern Star, and in Auburn belonged to the Fraternal Order of the Eagles and the American Legion Auxiliary Post #23. As a 56 year member of the Legion Auxiliary she served in many offices, including President. After suffering a stroke, Phyllis was admitted to the Nemaha County Hospital in Auburn on July 24, 2015. It was there she passed away, surrounded by family, on Tuesday, July 28, 2015 at the age of 88 years, 4 months, and 17 days. Her parents, brother Robert Seid, sister Mary Hager, and sister-in-law Deloris Seid preceded her in death. Those left to remember her loving ways include her husband Marvin; children and their spouses Shirley and Charles Hines of Auburn, Paul and Kathy Ebeler of Lincoln, Debbie and Mike McCall of Oakwood, IL, Elaine Cole and significant other Jeff of Tecumseh; 9 grandchildren; 12 great-grandchildren; brother Francis Seid of Falls City; many other relatives and friends. A funeral service will be Saturday, August 1, 10:30 a.m. at Hemmingsen Funeral Home in Auburn. Burial will follow in Sheridan West Cemetery near Auburn. Visitation will be Friday, 9:00 a.m. to 8:00 p.m., with family greeting friends 6:00 to 8:00. Memorials are suggested to family choice.

Phyllis Marie Seid, one of four children of Delbert Huber and Ruby Erma (Smith) Seid, was born March 11, 1927 in Auburn, Nebraska. She attended Bell School near her home, and then graduated from Nemaha High School in 1944. She also attended... View Obituary & Service Information

The family of Phyllis M. (Seid) Ebeler created this Life Tributes page to make it easy to share your memories.

Phyllis Marie Seid, one of four children of Delbert Huber and...

Send flowers to the Ebeler family.