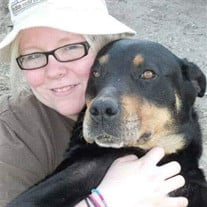 Rachel Kellee (McMann) Curry, one of two daughters of Donald Jeffrey and Gayle Lee (Herold) McMann, was born April 7, 1986 in Auburn, Nebraska. She attended Auburn Public Schools, graduating from high school in 2004. She then went to Peru State College in Peru, Nebraska, where she graduated in 2010 with a Psychology Degree. On October 13, 2012 Rachel was united in marriage to Michael Curry in Auburn. They made their home in Auburn, and Rachel became step-mother to Chloe Curry. Rachel loved animals of all kinds, and her work interests followed that love. She worked at Hearts United for Animals near Auburn for 10 years, and more recently was employed at Town and Country Veterinary Clinic in Auburn. An artist at heart, she began making jewelry in her spare time to share with family and friends. She enjoyed hunting mushrooms (and deer antlers) in the spring. She was very proud of the fact she was an “8 Gallon Donor” to the Red Cross blood drives. Rachel also liked to watch stand-up comedy on TV or live with Michael, and was an avid music concert attendee. She enjoyed older music of the 80’s, including Creedence Clearwater Revival, Queen, and David Bowie. On the evening of Sunday, October 21, 2018, Rachel was involved in a tragic automobile accident near Nebraska City, Nebraska. Rachel, along with Chloe, lost her life in the accident at the age of 32 years, 6 months, and 14 days. She was preceded in death by an aunt, her grandmother and grandfather Faye and Wayne Herold and grandpa Donald “Bud” McMann. Those left to remember Rachel’s great smile and loving ways include her husband Michael of Auburn; mother Gayle Watton of Auburn; father Jeff McMann of Peru; sister Alicia McMann of Auburn; mother- and father-in-law Melissa and Dan Buman of Auburn; grandmother Betty McMann of Brownville; her beloved “fur babies”; uncles, aunts, cousins, and many friends. A memorial service, officiated by Rev. Jonathan Rathjen, was Friday, October 26, 2018 at Hemmingsen Funeral Home in Auburn. A special recording by The Hollies was played. View Rachel's service via Livestream at: https://livestream.com/accounts/13846112/rachelcurryservice

The family of Rachel Kellee Curry created this Life Tributes page to make it easy to share your memories.

Rachel Kellee (McMann) Curry, one of two daughters of Donald...

Send flowers to the Curry family.