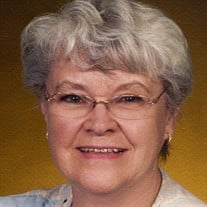 Raedith Joyce (Haskins) Hoffart, one of five children of Homer L. and Winifred (Knight) Haskins, was born October 17, 1936 at Plainview, Nebraska. She attended school in Plainview, where she graduated from high school. Rae went on to Wayne State College in Wayne, Nebraska, and earned her teaching certificate. On July 24, 1955, Rae was united in marriage to Lloyd Hoffart in the Plainview Baptist Church. Rae and Lloyd made their first home in Plainview, and in 1958 moved to Auburn, Nebraska. They would be blessed with three children: Alan, Dave, and Michelle. After her children were grown, Rae started work at the Nemaha County Hospital in Auburn as a Pharmacy Technician. She retired from there in 2014 after over 25 years of service to the hospital and its patients. Rae was a member of New Life Church in Auburn, and had belonged to the Order of Eastern Star for many years. She held all the offices of Eastern Star, including Worthy Matron. Rae believed in serving her community in many ways. She worked with the Red Cross for 25-30 years, teaching swim lessons for many of those years. She was on the Board of Westbury Heights Apartments, and volunteered with AseraCare Hospice as well. Following a recent diagnosis of Pancreatic cancer, Rae became ill and entered the Nemaha County Hospital on October 27th. It was there, with family around her, she passed away on Thursday, November 3, 2016, just 17 days after her 80th birthday. Rae was preceded in death by her son Alan Michael, her parents, brothers Harry and Ralph, and sisters Winifred and Vera. Rae is survived by her husband Lloyd of Auburn; son Dave of Auburn; daughter and son-in-law Michelle and Michael O’Neil of Cincinnati, OH; grandchildren Angela Marie Hoffart; Justin Patric O’Neil; Jacob Michael O’Neil; sister-in-law Carol Haskins of Little Rock, AR; other relatives and friends. A funeral service was Monday, November 07, 2016 at New Life Church in Auburn, officiated by Rev. Mike Mattox. Special music was presented by Chris Koperski and Teresa Moberly, vocalists, and Sandy Davis, pianist. Casket bearers were Dave Hoffart, Justin O’Neil, Rob Keating, Marvin Shimmel, Chris Shimmel, and Nick Shimmel. Jake O’Neil and Bill Straub were honorary bearers. Burial was in Sheridan Cemetery near Auburn.

Raedith Joyce (Haskins) Hoffart, one of five children of Homer L. and Winifred (Knight) Haskins, was born October 17, 1936 at Plainview, Nebraska. She attended school in Plainview, where she graduated from high school. Rae went on to Wayne... View Obituary & Service Information

The family of Rae Hoffart created this Life Tributes page to make it easy to share your memories.

Raedith Joyce (Haskins) Hoffart, one of five children of Homer...

Send flowers to the Hoffart family.