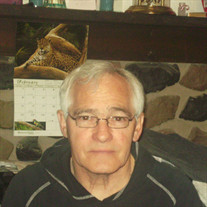 Rickey LeRoy Judd, son of Keith and Edna (Wallace) Judd, was born July 25, 1949 in McCook, Nebraska. He grew up and attended school in McCook. On December 13, 1967 Rick was united in marriage to Nancy Carbaugh in McCook. They were blessed with four children: Shane, Derek, Lana, and Tory. Rick loved the outdoors and nature. As a kid he loved going out and exploring. When he was able he would go for long walks to see the birds and animals. As he became less able to explore, he loved to sit out on the front porch or back deck and watch the birds, butterflies and animals that his flowers and plants would attract. During winter months he would watch what he could from inside and enjoyed his subscription to Birds and Blooms. For someone who didn't particularly enjoy school, Rick really enjoyed learning new things. At museums he would read and look at each display and then years later share a tidbit of what he had read. He also read science and history related magazines to help him appreciate and understand the world around him. He also was a master level user of the Google search--any time he had a question he would search out the answer on Google and liked to share what he learned. Rick loved music, singer/song writers were his favorite, but there was no one genre that appealed to him most. He had a huge collection of 8 track tapes, then albums, then cassette tapes, then CDs and now loves that he can find and listen to whoever strikes his fancy on YouTube. As he got more time and financial resources, Rick also enjoyed going to concerts to see his favorite musicians. Nancy, Lee, Al, Marlene, Shane, Lana and others all have great memories of different concert experiences with Rick. Rick was a humble man who truly appreciated all that he had in his life. He was quick to help his family and friends when his body allowed and was so grateful for all that people did for him. Rick had to learn to let people help him as his body was less and less able to allow him to help others and himself. Rick had many friends, but some of his best friends were actually family, his brothers and brothers -in-law, his kids and grandkids and especially his best friend of all, Nancy. As news of Rick's death spread, most noted the love shared by Rick and Nancy and how so many see it to be a great love story. They shared more than 50 years of marriage through all of life's blessings and challenges. Rick was a hard worker when his body allowed it. He worked a physically taxing job doing stucco and drywall for Roger Goltl Drywall for more than 40 years. Rick also worked hard to maintain each of his homes and took great pride in having a good looking yard, with nice flowers and a bountiful garden. Rick passed away unexpectedly at his home in Auburn, Nebraska on Tuesday, October 1, 2019 at the age of 70 years, 2 months, and 6 days. He is preceded in death by his parents, sister Veranna Nelson, brothers Russell and Rodney Judd, parents-in-law Edgar and Marcia Carbaugh, and brothers-in-law John and Jerry Carbaugh. Rick leaves behind his wife Nancy of Auburn; children and spouses Shane and Cammi Judd of Charlotte, NC; Derek and Kris Judd of Nebraska City; Lana and Pat Connor of Louisville, NE; Tory and Jennifer Judd of Conception Junction, MO; 14 grandchildren; 5 great-grandchildren; brothers and sisters-in-law Chuck and Linda Upp of Gaithersburg, MD; Bernard and Brenda Judd of Kearney, NE; Garold and Tammy Judd of North Platte, NE; brothers-in-law Lee Carbaugh, Alan Carbaugh, Tom Svoboda; sisters-in-law Barbara Carbaugh, Linda Leisure, Marlene Svoboda; other relatives and friends. A memorial service will be Saturday, October 5, 11:00 a.m. at the Auburn Christian Church. Memorials are suggested to the Auburn Christian Church.

Rickey LeRoy Judd, son of Keith and Edna (Wallace) Judd, was born July 25, 1949 in McCook, Nebraska. He grew up and attended school in McCook. On December 13, 1967 Rick was united in marriage to Nancy Carbaugh in McCook. They were blessed... View Obituary & Service Information

The family of Rick Judd created this Life Tributes page to make it easy to share your memories.

Send flowers to the Judd family.