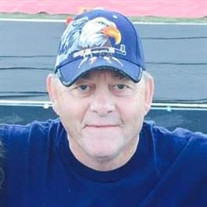 Richard Wayne Pugh of Tecumseh, Ne passed away at the Johnson County Hospital on November 23, 2021 at the age of 69. He was born on November 30th of 1951 in Auburn, Ne to Robert & Loretta Pugh. He was raised in Auburn and graduated from Auburn High School. During that time Rick went out for track, wrestling, and football. But the sport he truly loved was baseball. He loved being a lefthanded pitcher and first basemen with the highest batting average on the team. Rick also loved to hunt and fish. After high school Rick went to work at Wood Carve in Auburn and later went to Magnolia Metals. He wanted to try something different after that, so he went to work as a lugger, loading beef onto trailers at Missouri Beef Packers in Rock Port, MO. At that time, he met Diane Wamsley of Shubert, Ne. They were married March 5th of 1973 and to this union they had one daughter, Rena. Rick and Diane later divorced. Down the road he was blessed with a son Thomas and then met Donna Blex of Independence, KS. They were married on July 5th, 1986 and to this union came two children, Jaimee and Travis. After many years of marriage, Rick and Donna divorced. After the divorce he decided to move to Tecumseh, Ne where he met Peggy Yott who he stayed with until the day of his passing. Rick stayed working at the same plant for 28 years, seeing multiple owners such as Cambell’s Soup CO and MBA poultry. He retired June 30th of 2016. Rick is survived by two sons, Tommy (Lisa) Powell of Council Bluffs, IA and Travis (Dawn) Blex of Auburn Ne. Also, two daughters, Rena (Darin) Holben of Peru, Ne and Jaimee (Jon) Thomas of Auburn, Ne and many grandchildren, Danyel, Gavyn, Nick, Kyler, Trace, Alivia, Aleah, Keaton, Haevyn, great grandchild Korbyn, and partner Peggy Yott. Rick is preceded in death by his parents Robert and Loretta Pugh, brother Charles LaFrance, and sister Melody Pugh. A Celebration of Life will be held at a later date.

Richard Wayne Pugh of Tecumseh, Ne passed away at the Johnson County Hospital on November 23, 2021 at the age of 69. He was born on November 30th of 1951 in Auburn, Ne to Robert & Loretta Pugh. He was raised in Auburn and graduated from Auburn... View Obituary & Service Information

The family of Rick Pugh created this Life Tributes page to make it easy to share your memories.

Richard Wayne Pugh of Tecumseh, Ne passed away at the Johnson...

Send flowers to the Pugh family.