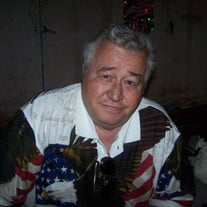 Richard Leslie Tanner, 75 years and 8 days, of Brownville, Nebraska was called home peacefully at his residence on October 24, 2019. He was born on October 16, 1944 in Council Bluffs, Iowa, the son of Arthur Richard and Wanda (Petersen) Tanner. He was one of four children. Rick grew up in Lake Manawa. He received his education in Council Bluffs and graduated from Abraham Lincoln High School in 1962. After graduation, Rick became employed by Butternut Coffee in Omaha, Nebraska and then became a mechanic for ‘Fat Daddy’ at Bellevue Honda in Bellevue, NE. In 1975 Rick moved from Lake Manawa to Nemaha, Nebraska with only a $100 dollar bill in his pocket driving a 1970 El Camino. At this time Rick became employed by Wayne Coulter as a mechanic at Coulter Kawasaki in Auburn, Nebraska. Rick was a novice motorcycle rider who competed fiercely. Some of his friends believe him to be one of the best motorcycle mechanics around. In July of 1980, Rick made Brownville his home. Rick began his 31-year stint at Cooper Nuclear Station at this time. Rick retired as a maintenance supervisor in 2011 and continued to work a handful of outages afterwards. Rick was a well-liked employee at CNS. The people he worked with at Cooper truly became part of his family. On June 27, 2009, he was united in marriage to Barbara Jean Sherman. Rick was a proud father to his children, Robin Narmi of Council Bluffs, IA., Misti Hayes (Chris) of Omaha, NE., Richard Tanner (Debbie) of Omaha, NE., Russel Tanner (Courtney) of Brownville, NE., Rena Holben (Darin) of Peru, NE.,Travis Sherman of Falls City, and Kimberly Forbes (Sean) of Wahoo, NE. Rick’s favorite past times involved gardening, working in his yard, tinkering in his garage, riding motorcycles, cruising through Brownville on his mule multiple times a day, wrapping Christmas gifts ‘just right’, going for ice cream, raising cows and chickens to feed his children, spending time with his children, grandchildren, and his bride. Most of all, Rick enjoyed cuddling with Garfield. Rick was a very generous man and a people-person, who made a lasting impact on everyone he encountered. Rick was always available to lend a helping hand and loved to show his support for southeast Nebraska. Rick truly was one of a kind. He had quotes for every situation and was never a loss for words. There are a lot of memories and stories that involve Rick. However, a few that he is well known for are: Driving his motorcycle naked through Whiskey Run, lighting the road on fire and driving his motorcycle through it while standing up, and throwing the best parties where you were expected to show up empty handed. And, as we all know, Rick did what he wanted, when he wanted, and would tell you “Because I can!” Rick was preceded in death by his sister, Pam Tanner, and both of his parents. He is survived by his two brothers, Pat Tanner (Anne) of Council Bluffs, IA. and Ron Tanner (Jo Anne) of Council Bluffs, IA., his wife, his children, grandchildren, great grandchildren, and many other family members and friends. Rick was a loving husband, father and grandfather and will be greatly missed by many. A memorial service will be Wednesday, October 30, 10:00 a.m. at the former Southeast Consolidated School Building in Stella. Burial of ashes will follow in Walnut Grove Cemetery at Brownville. Visitation will be at the funeral home in Auburn Tuesday 9:00 a.m. to 8:00 p.m., with family greeting friends 6:00 to 8:00.

Richard Leslie Tanner, 75 years and 8 days, of Brownville, Nebraska was called home peacefully at his residence on October 24, 2019. He was born on October 16, 1944 in Council Bluffs, Iowa, the son of Arthur Richard and Wanda (Petersen)... View Obituary & Service Information

The family of Rick Tanner created this Life Tributes page to make it easy to share your memories.

Send flowers to the Tanner family.