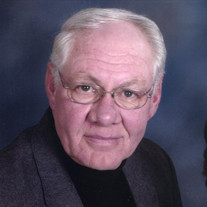 Robert Dale Hogrefe, youngest of four children of Ernest L. and Lenora L. (Gerdes) Hogrefe, was born January 9, 1948, in rural Auburn, Nebraska. He was baptized February 8, 1948, and confirmed June 10, 1962, by Rev. Walter Lentz at St. John (Stone) Church. Robert attended Johnson High School and graduated on May 17, 1966. On August 21, 1970, Robert was married to Susan Rockemann by Rev. Alan Lorentzen. They made their home in the Auburn area and were blessed with two sons, Jeffrey and Quintin. Bob was a member of St. Matthew Lutheran Church in Johnson. His activities at church were serving on Council and Cemetery Board. Bob worked in law enforcement, first as Deputy Sheriff and later as Police Chief in Auburn. He then worked at Cooper Nuclear Station in Brownville. Bob was also on the Rural Fire Department Board. In his spare time, he loved to work with his horses, raising many colts and breaking them to ride. Later, he enjoyed riding in his buggy with Susie and their horse, Moe. Bob and Susie liked to travel with their motorhome, taking trips with their horses to new riding places. Later, they enjoyed going to Texas in the winter months and meeting new friends. Bob restored many tractors and other pieces of machinery. He liked to see something old become brand new looking. One of this tractors even went to Oxnard, CA. Bob passed away at his home on Tuesday, April 12, 2016, having reached the age of 68 years, 3 months, and 3 days. He was preceded in death by his parents, a brother, Marvin, and a sister, Mary Ann. Those left to celebrate his life include his wife, Susie of Auburn; sons and daughters-in-law Jeff and Linda of Omaha, Quint and Angeline of St. Louis, MO; grandchildren Zach, Max, and Wil Hogrefe; sister and brother-in-law Phyllis and Robert Williamson of Dawson; other relatives and many friends. Memorials are suggested to family choice.

The family of Robert D. Hogrefe created this Life Tributes page to make it easy to share your memories.

Send flowers to the Hogrefe family.