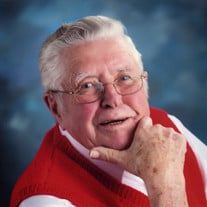 Robert W. Holtzman, lifelong resident of southeast Nebraska, passed away June 13, 2018 at the age of 94. Bob was born in Omaha and resided in the Auburn and Stella area his entire life. He was a resident of the Good Samaritan Society-Auburn for the last three years due to failing health. Bob was educated at the Stella schools, graduating from high school at the age of 16. He enlisted in the U.S. Army, serving as a surgical tech in England and Europe during World War II. After his honorable discharge he returned to Auburn where he joined the National Guard. Bob married Iris Lawrence upon his return, and they had five children. Iris passed away in 1966. Bob married Mary Lotter in 1969, and she passed away in 2017. Bob was employed with the U.S. Postal Service for many years, retiring from there. After retiring his worked at the Engles gas station in south Auburn and then for the City of Auburn doing maintenance of the city parks for several years. He was a volunteer fireman for many years and served as an Assistant Chief during his time with the Department. He also helped start the first EMT Unit for the town. Bob was active in the American Legion and was a drummer for the Drum and Bugle Corps. He served as a deacon for several years at the Auburn Christian Church, where he was a member. Bob is survived by his children Gail Holtzman of Rockford, IL, Peggy and husband Larry Slater of Davies, IL, Larry and wife Pat Holtzman of Auburn, Jay and wife Janiene Holtzman of Leveland, TX; Iris Elaine Michaud of Clarksville, TN; step-son Larry Ray Lotter of Washington; 11 grandchildren; 17 great-grandchildren; 2 great-great-grandchildren; other relatives and friends. A funeral service will be Monday, June 18, 2:00 p.m. at Hemmingsen Funeral Home in Auburn. Burial will follow in Sheridan Cemetery with graveside military honors provided by American Legion Post #23 of Auburn. Visitation will be at the funeral home Sunday 9:00 a.m. to 8:00 p.m., with family greeting friends 5:00 to 7:00. Memorials suggested to Auburn Rescue Squad. View Robert's funeral service via Livestream at: https://livestream.com/accounts/13846112/holtzman

Robert W. Holtzman, lifelong resident of southeast Nebraska, passed away June 13, 2018 at the age of 94. Bob was born in Omaha and resided in the Auburn and Stella area his entire life. He was a resident of the Good Samaritan Society-Auburn... View Obituary & Service Information

The family of Robert W. Holtzman created this Life Tributes page to make it easy to share your memories.

Send flowers to the Holtzman family.