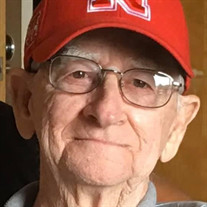 Robert Melvin Ross was born May 23, 1934 in Scottsbluff, Nebraska. He was one of three children of Harvey D. and Eleanor Louise (Chadwick) Ross. Shortly after his first birthday, Bob became ill with polio and would spend the next year in Children’s Hospital in Denver, Colorado. Shortly before starting school, the family moved to Columbus, Nebraska where Bob attended school and graduated from Columbus High School in 1952. When he was 16, Bob started delivering telegrams for Western Union. After graduating from high school, he attended the University of Nebraska at Lincoln. After a year of college, Bob decided to instead go to work and began working for Dale Electronic, until entering the United States Army in April 1956. Bob served his country until his honorable discharge in 1959, when he then went back to work for Dale Electronic. In 1962, he began working for Western Union again on Coast to Coast Communications, until retiring from Western Union in 1988. Bob then kept busy working nuclear power plant outages. On February 20, 1966, Bob was united in marriage to Earlene Schroeder at St. John Lutheran Church in Beatrice, Nebraska. To this union, four children were born: Mary Ann, Robert D., Christine, and an infant daughter that Robert and Earlene lost. In his spare time, Bob enjoyed fishing and hunting. He taught gun safety classes and was a member of the Elks Club for over 50 years. Once Bob retired, he golfed daily. Bob enjoyed traveling and spending time with his grandkids. Due to health, Bob moved to the Prestige Care Center in Nebraska City, Nebraska. It was there that he passed away on January 19, 2020, having reached the age of 85 years, 7 months, and 27 days. He was preceded in death by his parents, infant daughter, and brothers-in-law Dr. Del Weber and Frank Hoppe. Those left to mourn his passing are his wife Earlene of Auburn, children Mary Ann and husband Mike Somers of Watertown, MN, Robert D. and wife Tami Ross of Grand Junction, CO, Christine and husband Matthew Hickey of Adel, IA; grandchildren Kelsie Somers, Kenadie Somers, Kaitlyn Somers, Kaiden Somers, Brooke Hickey, Grant Hickey, Andrew Hickey; sisters Lou Ann Weber of Omaha, Carolyn Hoppe of Columbus; other relatives and friends. A funeral service will be Wednesday, January 22, 10:00 a.m. at Hemmingsen Funeral Home in Auburn. Visitation with family greeting friends one hour prior to service. Committal service and burial will take place at 3:00 p.m. in Roselawn Cemetery at Columbus. Memorials suggested to Alzheimer’s Association or Auburn Rescue Squad.

Robert Melvin Ross was born May 23, 1934 in Scottsbluff, Nebraska. He was one of three children of Harvey D. and Eleanor Louise (Chadwick) Ross. Shortly after his first birthday, Bob became ill with polio and would spend the next year in... View Obituary & Service Information

The family of Robert M. "Bob" Ross created this Life Tributes page to make it easy to share your memories.

Send flowers to the Ross family.