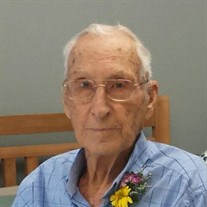 Robert Glenn "Bob" Sandfort, son of Edward Elmer and Esther Mae (Fricke) Sandfort, was born on June 9, 1922 in a farm home six miles east and north of Humboldt, Nebraska. He attended Hazel Dell rural school for eight years and graduated from Humboldt High School in 1939, shortly before his seventeenth birthday. He attended what was then the College of Agriculture at the University of Nebraska for two years on a Regents Scholarship. He returned home to help his father on the farm and worked for farmers in the neighborhood. His last employer, a farmer and cattle feeder, obtained a number of deferments from military service for him. In 1945 he refused any more deferments and was promptly inducted into the U.S. Army for basic training. He and Lenore Jeanette Gravatt were married in a simple ceremony on August 4, 1945 in the chapel at Coryell Park and they learned on his way back to camp after his leave that the war had ended. After several weeks in limbo he was sent to Honolulu, Hawaii as an Army Military Policeman, where he served for one year and was discharged from the army as a Staff Sergeant. As well as patrolling the streets of Honolulu, one of his duties was serving on a detail guarding the “Enola Gay” when the plane returned from its bombing mission over Japan. His most unpleasant duty was serving on an honor guard escorting bodies, sometimes as many as 500 or 600, to the cemetery for burial. Following his discharge from military service, Bob and Lenore farmed near Humboldt until March 1, 1950 when they, with their young son, moved to a farm near Brock, Nebraska where he resided until his death. Bob probably would never have considered himself part of the “in” crowd, however, he was insistent that his children do the right thing, not the popular thing. He was innovative, interested, involved, inquiring, intuitive, and insightful, as evidenced by the following: Bob was a long-time member of the Humboldt and Brock United Methodist Churches and served in several offices in the Brock church. He was treasurer of the Brock Board of Education for 14 years and secretary of the Johnson-Brock Board for 4 years. He helped organize and served on the Brock-Julian Rural Fire District Board of Directors for 42 years. He helped organize the Nemaha County Mutual Funding Organization (MFO) for fire districts and served as president for the first years. He served several 4-year terms on the Nemaha Valley Museum Board of Directors, part of the time as President of the Board, and continued to volunteer at the Museum for many years. He loved to tell stories, read, and write – completing his memoirs “From Lamps to Lasers”, and his obituary. He passed away on Tuesday, November 1, 2016, at the age of 94 years, 4 months, and 23 days. Surviving are his wife, Lenore; son, Ross Edward Sandfort and wife Linda; daughter, Jeanette Ann Shaw and husband Daniel; and son, Glenn Allen Sandfort and wife Sophia. Grandchildren: Michael Ross Sandfort and wife Tonya, Melissa Lynn Jackson and husband Jeff, Brent Daniel Shaw and wife Georganne, Darren Lee Shaw and wife Megan, Jeff Allen Shaw, Joelle Wellansa Sandfort, and Elliot Tadesse Sandfort. Great-grandchildren: Hailey Sandfort, Audrey Sandfort, Braden Sandfort, Harper Sandfort, Kyle Shaw, Madison Shaw, Landon Shaw, and Grant Shaw. Step-great-grandchildren: Wiley Rudloff-Shaw, Hannah Rudloff-Shaw, Wyatt Jackson, and Korbin Jackson. Also surviving are brother, Charles Sandfort and wife Jean; sister, M. Lenore Spencer; sister-in-law, Shirley Sandfort; sister-in-law, Ginger Sandfort; sister-in-law, Jane Gravatt. He also leaves cousins, nephews, nieces, great-nieces, great-nephews, other relatives, and many friends. He was preceded in death by his parents; brother, Wayne Sandfort; brother, Keith Sandfort; and a stillborn brother. Bob has donated his body to the Nebraska State Anatomical Board. A memorial service will be Saturday, November 5, 11:00 a.m. at the Brock United Methodist Church. No visitation is planned. Bob’s ashes will be buried at Grant Evergreen Cemetery near Talmage at a later date. Memorials in lieu of flowers are suggested to Brock Methodist Church or Nemaha Valley Museum.

The family of Robert G. "Bob" Sandfort created this Life Tributes page to make it easy to share your memories.

Send flowers to the Sandfort family.