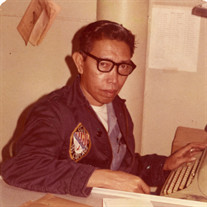 Rodolfo Arellano Alarcon, one of 15 children of Lazarus and Macaria (Arellano) Alarcon, was born March 18, 1927, in Cavite City, Philippines. Rodolfo was baptized in the Roman Catholic Church in Cavite City, and also attended school in Cavite City. Rodolfo graduated from Arellano University with a Bachelor of Science in Animal Husbandry. In March of 1955, Rodolfo enlisted in the United States Navy. He served 20 years before being honorably discharged in June of 1974. Rodolfo was first aboard the U.S.S. Randall, then the U.S.S. Evans, the U.S.S. Brinkley Bass, and the U.S.S. Chicago for a majority of his service, and was stationed at Guantanamo Bay, Cuba; U.S. Naval Station Adak, Alaska; and N.A.S. Gross Ile, Michigan. Rodolfo was awarded The Vietnam Service Medal, Republic of Vietnam Campaign Medal, Armed Expeditionary Medal, 5 Good Conduct Awards, and a Meritorious Unit Commendation. He was a Petty Officer Second Class at the time of his discharge. Rodolfo started a family tradition to serve in the United States military, with the 3rd generation now serving. On March 19, 1963, Rodolfo was united in marriage to Concepcion Argame in Cavite City. The couple lived in the Philippines until moving to St. Mary’s, Georgia in 1998 and Nebraska in 2017. They were blessed with three children: Adelino, Margarita, and Antonino. Rodolfo was a 33rd Degree Master Mason, and enjoyed hanging out with his fellow Masons. He loved books, and enjoyed planting roses and orchids among many other varieties of plants. He was an animal lover, raising such pets as parakeets and doves, rabbits, chickens, and also maintained a fish pond. Rodolfo was a loving and supportive husband, father, uncle, and grandfather. Rodolfo passed away peacefully at his home in Auburn, Nebraska on Friday, January 5, 2018, at the age of 90 years, 9 months, and 18 days. He was preceded in death by his parents and 14 siblings. Rodolfo is survived by his wife Concepcion “Sioning” of Auburn; children Adelino (Cherri Beroncal) Alarcon of Jacksonville, FL; Margarita (Jhune) Delos Reyes of San Diego, CA; Antonino Alarcon (Alex Evans) of Auburn; grandchildren Aldrin (Casey) Alarcon, Maria Crisselyn (Adam) Herring, Angel Cherelle Alarcon, Justin Paul Delos Reyes (Lyn Asley), Janel (PJ) Balbin, Jemayne Delos Reyes (Leilani Bautista), and Jadeene Delos Reyes; great-grandchildren Avery Alarcon and Mavis Delos Reyes; other relatives and friends. Funeral Mass will be celebrated Thursday, January 11, 10:00 a.m., at St. Joseph Catholic Church in Auburn. The Rosary will be recited at 9:30 a.m. Visitation will be at the funeral home Wednesday 9:00 to 8:00, with family greeting friends 6:00 to 8:00. Committal services and burial will be Thursday, 2:00 p.m., at Omaha National Cemetery. Military honors will be provided by U.S. Navy Honors Detail and Papillion American Legion Post #32.

Rodolfo Arellano Alarcon, one of 15 children of Lazarus and Macaria (Arellano) Alarcon, was born March 18, 1927, in Cavite City, Philippines. Rodolfo was baptized in the Roman Catholic Church in Cavite City, and also attended school in Cavite... View Obituary & Service Information

The family of Rodolfo Arellano Alarcon created this Life Tributes page to make it easy to share your memories.

Rodolfo Arellano Alarcon, one of 15 children of Lazarus and Macaria...

Send flowers to the Alarcon family.