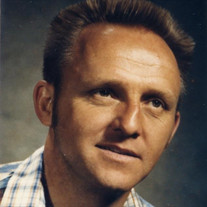 Roger Lee Meyer, one of three children of Herman G. and Lila A. (Bohling) Meyer, was born September 8, 1940, at Auburn, Nebraska. He was baptized October 2, 1940, at St. John Lutheran Church near Auburn, and attended Happy Valley District 74 School. Roger then attended and graduated from Auburn High School. Roger entered the United States Air Force, serving as an airplane mechanic, until his honorable discharge on January 19, 1967. He then returned to Nemaha County and the farm. On July 25, 1981, Roger was united in marriage to Patti Cook at the First United Methodist Church in Auburn. They made their home in the Auburn area. A lifelong resident of Nemaha County, Roger was also a lifelong farmer. He was a Life Member of the NRA, and enjoyed woodworking in his spare time. Suffering from ill health, Roger was able to stay at his home in Auburn, cared for by Patti and his two sons. With his family around him, he passed away on Friday, April 7, 2017, at the age of 76 years, 6 months, and 30 days. In addition to his parents, Roger was preceded in death by a son Danny Haen. Roger is survived by his wife Patti of Auburn; sons and daughters-in-law Ralph B. and Christine Haen of Lincoln; Dustin and Melissa Meyer of Murdock; grandchildren Patrick and Piper Haen, Maximus Meyer; sister Ruth Meyer of Auburn; brother and sister-in-law Roland and Marilyn Meyer of Davis, CA; other relatives and friends. A funeral service will be Wednesday, April 12, 10:30 a.m. at Hemmingsen Funeral Home in Auburn. Burial will follow in Sheridan West Cemetery. Visitation will be at the funeral home Tuesday 9:00 a.m. to 8:00 p.m., with family greeting friends 6:00 to 8:00. Memorials are suggested to Nebraska Children’s Home.

The family of Roger L. Meyer created this Life Tributes page to make it easy to share your memories.

Roger Lee Meyer, one of three children of Herman G. and Lila...

Send flowers to the Meyer family.