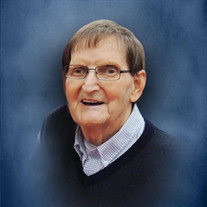 Roger Edwin Moerer, son of Richard Moerer and Ida (Bohling) Moerer, was born May 21, 1938 in Graceville, Minnesota. He was one of nine children born to this union. Roger was baptized June 12, 1938 at St. John’s Lutheran Church in Dumont, Minnesota and confirmed November 9, 1952 at Trinity Lutheran Church in Wheaton, Minnesota. The family moved back to Nebraska where Roger helped with farming and later with his brother Ray in the construction business. On September 22, 1963, Roger and JoAnn Meyer were married at Zion Lutheran Church in Johnson, Nebraska. Two daughters were born to this union. Roger and JoAnn were later divorced but continued to celebrate holiday and special events together with their family. Roger had a variety of occupations throughout his life. He owned a feed and produce business, load vending machine business, local consignment auctioneer, and sold produce at the local Farmer’s Market. He also enjoyed listening to music, reading books, playing cards, planting a garden, and spending time visiting with his family and friends. Roger was very resilient and strong willed. He tackled and overcame many health concerns over the last 30 years of his life until passing peacefully on May 17, 2016 at the Good Samaritan Society-Auburn. He was preceded in death by his parents, sister Judy Moerer, brothers Ray and Marvin Moerer, and his daughter Juliann Gauchat. He reached the age of 77. Those left to celebrate his life are daughter Tiffany (Dan) Gauchat; son-in-law Rodney Gauchat; grandchildren Wyatt and Danielle Gauchat; former spouse JoAnn Moerer; former brother-in-law Richard (Debbie) Meyer; sisters Dorothy (Terry) Laubsch, Lucy Moerer, Norma (Luther) Werth, Elaine Schardt, Margaret (Roger) Simmons; sisters-in-law Lorna Moerer and Eunice Stuart; many nieces, nephews; other relatives and friends. Viewing of Roger's service available via Livestream at: https://livestream.com/accounts/13846112/events/5430604

Roger Edwin Moerer, son of Richard Moerer and Ida (Bohling) Moerer, was born May 21, 1938 in Graceville, Minnesota. He was one of nine children born to this union. Roger was baptized June 12, 1938 at St. John&#8217;s Lutheran Church in... View Obituary & Service Information

The family of Roger E Moerer created this Life Tributes page to make it easy to share your memories.

Send flowers to the Moerer family.