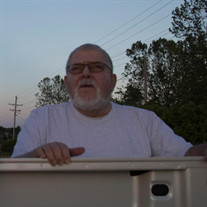 Ronald Lynn Behrends, one of five children of Donald and Betty Jean (Meininger) Behrends, was born July 8, 1953, in Auburn, Nebraska. Ron grew up in Nemaha County, attending elementary school in Auburn, and high school at both Auburn and Johnson-Brock High School. After high school, Ron began working for the Auburn Board of Public Works. He started out reading meters and also worked for a short time as a lineman before he was transferred to the water department. Ron worked 46 years for the Board of Public Works before retiring. Ron was baptized and confirmed at St. Paul Lutheran Church in Auburn. He also belonged to the Sons of the American Legion, Auburn Eagles Aerie #3767, and the Auburn Country Club. In his spare time, Ron enjoyed fishing, shooting blue rock, and golfing. He loved to go “road tripping” just cruising the back roads in his truck, often stopping at the river just to watch. In late June Ron was transported to St. Elizabeth Medical Center in Lincoln, Nebraska. After nine days at the hospital as staff did their best to assist him, Ron passed away there on Saturday, July 3, 2021, just 5 days short of his 68th birthday. His parents, sisters Karen and Wanda, and brother Charles preceded him in death. Ron is survived by Linda Bantz of Auburn, Lonny (Kim) Bantz of Colfax, ND, Jenny Bantz of Lincoln, Kaylee Bantz “It” of Lincoln, sister Janice Andersen of Lincoln, brother-in-law Jerry Strecker of Primghar, IA, nieces, nephews, other relatives, and friends. Visitation will be Friday, July 9, 2021, 9:00 a.m. to 8:00 p.m. at Hemmingsen Funeral Home in Auburn, join the family for “Happy Hour” from 5:00 to 8:00 on Friday. Burial of ashes will be held at a later date in St. Paul Lutheran Cemetery at Auburn. Memorials are suggested to family choice.

Ronald Lynn Behrends, one of five children of Donald and Betty Jean (Meininger) Behrends, was born July 8, 1953, in Auburn, Nebraska. Ron grew up in Nemaha County, attending elementary school in Auburn, and high school at both Auburn and... View Obituary & Service Information

The family of Ron Behrends created this Life Tributes page to make it easy to share your memories.

Ronald Lynn Behrends, one of five children of Donald and Betty...

Send flowers to the Behrends family.