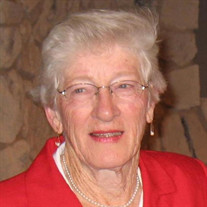 Rosalie Ann Meixsell was born in Johnson, Nebraska on August 4, 1933 to Ora and Mildred Boellstorff, she was the oldest of three children. She attended the Cherry Grove Country School and then moved on to attend and graduate from Brock High School. Rosalie attended Peru State College where she received a teaching certificate. Teaching school in Plattsmouth was a great memory of Rosalie Ann’s. It was during this time in her life she met the love of her life, Nevin Herbert Meixsell. Their first date consisted of a dinner of pizza and was remembered by both as the first night and the first step of a wonderful, crazy and wild journey. Rosalie married Nevin on April 21, 1956 and proceeded to travel with him around the world as he performed his duty in the United States Air Force. They lived in such wonderful places as Turkey, Morocco and Fiji as well as multiple places in the United States. It can be said they both served their country. Following the military career, Rosalie settled in the Washington D.C. area with Nevin. Rosalie began a long career with Giant Grocery Stores and retired after over 25 years of service. She was a great employee and loved working in the bakery and floral departments. During this time Rosalie developed a marvelous talent for cake decorating. She was highly sought after to craft her wonderful creations for birthdays, anniversaries and weddings. She crafted many a wedding cake for family including her brother Mark, and many nieces and nephews. Rosalie was very, very fond of her pets and animals. Rosalie loved many animals in her lifetime including Pepe the dog, Bunzie the rabbit, Calli the cat and a host of cows, Koi fish and other furry friends. Rosalie enjoyed other hobbies including gardening and caring for her flowers, square dancing, and cooking. Following her retirement, she relocated with Nevin to the Shenandoah Valley and the home of their dreams. It can be said of Rosalie that one of her favorite activities during this time was attending auction and estate sales with her husband. It was not at all uncommon during this time when attending these events for Rosalie Ann to get whatever she wanted. Once she expressed a desire for anything, a dish, picture or jar of buttons, her beloved would just calmly outbid anyone else… just for her. It can also be said that wherever they lived, there was not just one, but likely at least 2 or 3 favorite restaurants. Her family and friends will remember stories of food and experiences at Red Lobster, the Ribster and Ben Franklins. Additionally, she was fond of attending “the Crawl” and ending her days with a margarita, a whiskey and 7, (usually more whiskey than 7) or a glass of her Chillable Red Box wine. Rosalie relocated back to Johnson, Nebraska in 2017 following the death of husband of 60 years. She is now reunited with her beloved who met her as she crossed over with his endearments and pet phrases for her of “tiger” and “doll”. Also preceding her in death are her parents Mildred and Ora Boellstorff. Survivors include her brothers and sisters-in-law Robert and Delores Boellstorff of Waverly, Mark and Kathy Boellstorff of Johnson; sisters-in-law Shirley (Bud) Petkus of Brodheadsville, PA, Melody (Ruben) Torres of Nazareth, PA; many nieces, nephews, other relatives and friends. A memorial service will be held Thursday, February 17, 2022, 11:00 a.m. at Charter Oak Christian Church in Talmage. Visitation will be on Wednesday at Hemmingsen Funeral Home in Auburn from 9:00 a.m. to 8:00 p.m. with family greeting friends from 5:30 to 7:30. Burial of ashes will take place at a later date in Arlington National Cemetery at Arlington, VA. Memorials are suggested in lieu of flowers to National Safe Place Network or Charter Oak Christian Church.

Rosalie Ann Meixsell was born in Johnson, Nebraska on August 4, 1933 to Ora and Mildred Boellstorff, she was the oldest of three children. She attended the Cherry Grove Country School and then moved on to attend and graduate from Brock High... View Obituary & Service Information

The family of Rosalie Ann Meixsell created this Life Tributes page to make it easy to share your memories.

Rosalie Ann Meixsell was born in Johnson, Nebraska on August...

Send flowers to the Meixsell family.