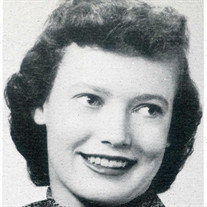 Ruth Elaine (Bohling) Brand, the middle of 13 children of Henry W. and Erna Marie (Meyer) Bohling, was born May 7, 1937, in Auburn, Nebraska. She was baptized May 30, 1937, by Rev. Wiebke and confirmed March 18, 1951, by Rev. Kolm, both at St. Paul Lutheran (Hickory Grove) Church near Auburn. Ruth grew up on a farm outside of Auburn and attended Auburn Public Schools for her formal education, graduating from Auburn High School in 1955. On June 6, 1955, Ruth was united in marriage to Vilas E. Rader at Hickory Grove Church. The couple would be blessed with five children: Deborah, Pamela, David, Duane, and Bryan. Ruth and Vilas made their home in Papillion, Nebraska. Vilas passed away, Ruth continued living in their home in Papillion, Nebraska. On December 7, 1997, she married Glen Brand in a private residence in Omaha. They lived in Omaha and wintered in their home in Florida. Glen was an Olympic gold medalist and had many connections around the globe. This was a chance for Ruth to travel for the first time and got her out to see the world. Ruth was a member of and very involved in First Lutheran Church in Papillion. Whether she was in Nebraska or Florida, she enjoyed listening to Family Radio Network which featured hymns and sermons throughout the day. Ruth also was an avid reader of the Bible. After Glen passed Ruth moved to their winter home in Gainesville, Florida where she lived for 12 years. It was there she passed away on Wednesday, July 28, 2021, at the age of 84 years, 2 months, and 21 days. In addition to her parents and both husbands Ruth was preceded in death by her siblings Henry Bohling, Raymond Bohling, Della Hazen, Leona Soules, Donald Bohling, and Kenneth Bohling. Ruth is survived by her children Deborah Huebscher of Omaha, Pamela Bloodsworth of Papillion, David Rader of Kingsport, TN, Duane Rader of Auburn, Bryan Rader of Gainesville, FL; grandchildren Adam Graskowiak, Jackie Graskowiak, Andrew Rader; great-granddaughter Makayla Graskowiak, sisters and brothers Eileen Pieratt, Herbert Bohling, Marilyn Williford, Robert Bohling, Judith Hockenberry, Kathleen Ferguson, other relatives and friends. A funeral service will be Saturday, August 7, 2021, 10:00 a.m. at Hemmingsen Funeral Home in Auburn. Family will greet friends one hour prior to service. Burial will follow in St. Paul Lutheran (Hickory Grove) Cemetery near Auburn. Memorials suggested to St. Paul Lutheran (Hickory Grove) Church. To view Ruth's service live click on this link: https://livestream.com/accounts/13846112/events/9791277

The family of Ruth (Bohling) Brand created this Life Tributes page to make it easy to share your memories.

Ruth Elaine (Bohling) Brand, the middle of 13 children of Henry...