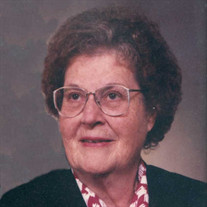 Ruth Elaine Gerdes, one of four children of William Alex (Ek) and Cora Vincent (Walsh) Wilkinson, was born April 11, 1925, on the family farm in rural Nemaha County. Ruth was baptized by Rev. C. Waters at Pleasant View Methodist Church in rural Auburn, and later confirmed by Rev. G. K. Wienke at St. John Lutheran (Stone) Church near Auburn. Ruth attended grade school at the Lampe School, District #79, and graduated from Bratton Union High School in 1942. After high school, Ruth went on to Peru State College where she earned her teaching certificate. Ruth taught at Lampe School from 1943-1945, and then later at Howe School, District 39, for 32 years, before retiring in 1989. Ruth met Orville Gerdes, the love of her life, at her baccalaureate exercises in 1942. They eloped to Hiawatha, Kansas on April 28, 1945 and settled on the family farm. Three children were born to this union: Sandra, Ronald, and Richard. Music was the highlight of Ruth’s life. She played piano and violin for 6 years in the Bratton Union High School Orchestra. She directed children’s choir, sang in the church choir, as well as in quartets for many funerals. She was the organist at St. John Lutheran for the first time for Rev. Walter Lentz’ first sermon, and went on to serve as organist for many, many years. Ruth enjoyed going to auctions and thrift stores to buy blankets and sheets that she would then donate to the WELCA ladies to use during their fall and winter quilting sessions for LWR and other local projects. She also loved working in her flower beds and doing the mowing around the farm. After Orville’s passing in May of 2000, Ruth remained on the farm until suffering a stroke on March 7, 2012. After living with her son and his family in Gretna for a year, she moved to Belle Terrace where she passed away on Friday, June 6, 2014, having reached the age of 89 years, 1 month, and 26 days. In addition to her husband and parents, Ruth was preceded in death by her brothers Clarence, William, and Raymond; and step-great-granddaughter Cassidy Troxel. Ruth is survived by her children and spouses Sandra and Leo Eden of Johnson, NE; Ronald “Tiny” and Rhonda Gerdes of Gretna, NE; Richard and Kay Gerdes of Wellsville, KS; grandchildren and spouses Lisa Eden Gobber and Rodney of West Des Moines, IA; Eric and Cindy Eden of Humboldt, NE; Kirk and Kristin Gerdes of Morgantown, WV; Joel and Nicole Gerdes of Lexington, KY; Katherine Elaine Gerdes of Gretna, NE; great-grandchildren Trenton and Taylor Gobber; Chyenne Eden; Owen, Dane and Anna Rose Gerdes; Gavin Gerdes; step-great-grandchildren AshLynn and Mitchell Seals; Mendell Rulla; Kaylee and Adam Gibson; sister-in-law Marie and husband Alois Bell; nieces, nephew, many other relatives and friends. Funeral services are Thursday, June 12, 2014, 10:30 a.m. at St. John Lutheran (Stone) Church, officiated by Rev. Catherine Burroughs. Susie Hogrefe is organist for congregational hymns and soloists are Lisa Gobber and Katherine Gerdes. Eric Eden, Kirk Gerdes, Joel Gerdes, Rodney Gobber, Tim Brewer, Kris Hector, and Daryl Stutheit are serving as pallbearers. Leroy Aden, Maynard Behrends, and Gilbert Johnson are honorary pallbearers and Katherine Gerdes and Pam Hector are flower attendants. Burial will follow in the church cemetery. Memorials suggested in lieu of flowers.

The family of Ruth E. (Mrs. Orville) Gerdes created this Life Tributes page to make it easy to share your memories.

Send flowers to the Gerdes family.