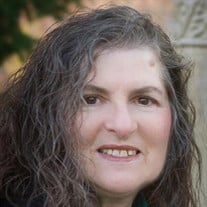 Sandra Kay (Kess) Davis was born November 11, 1945 and entered into her new residence of Heaven on June 25, 2021 at 6:55 PM. Sandy was greeted by her Heavenly Father, and is enjoying the wholeness that only Jesus can offer. There is now no brokenness in her life, spirit, soul, and body. Sandy was born to David B. and Bertha A. (Wertz) Kess in Lincoln, NE. Sandy grew up in Lincoln, she attended Saratoga Elementary School, and then Lincoln High School. Sandy went on to work at Kings, and as a secretary at the State Capital building. She continued to live in Lincoln until her marriage to Harold L. Davis in 1972 at which point she relocated to a farm just outside of Brownville, NE. Sandy enjoyed living in the country, and being a homemaker to her children. The couple divorced in 1993, but Sandy continued to live on the farm. In later years she had her own cleaning business and provided childcare for many local families. Sandy was an avid learner concerning all things nutrition. She was a Le Leache League leader for over 40 years, she loved being able to help out new mothers. Sandy was very active in her church, she was a Sunday school teacher at the Nemaha Christian Church, she played the piano for over 20 years at New Life Church in Auburn, and she enjoyed being a part of various church activities, including helping out at VBS, special meetings, and so on. Sandy also enjoyed being an Avon representative for over 20 years. She loved attending the various sport and school activities her grandchildren were involved in, and reading books to them as young children. Sandy also had an EXTREME love for her 1969 Dodge Charger. With her love for muscle cars and going fast, this caused her to get into some trouble with law enforcement. She was known for the occasional street drag when tempted with the opportunity. Sandy was not only a Mopar girl but also a good friend. There were many times she would visit friends, and stay talking for hours to comfort, exhort and discuss deep issues of life. Sandy is survived by her children John & wife Anita Brodecky of Lamar, CO; David & wife Lisa Davis of Auburn, NE; Debra & husband Joe Cox of Grantville, GA; Daniel & wife Victoria Davis of Redmond, OR; DeeAnn Davis & husband Josiah Tubbs of Lincoln, NE; grandchildren Brocc & Brennan Brodecky; Tristan, Brena, Kyle & Nolan Davis; Victoria, Kaitlyn & Alexander Cox; Kirsten, Makenzi & Alicia Davis; Estella Davis-Tubbs; and sister Patricia Lutzi; other relatives and friends. A memorial service will be Monday, July 5, 2021, 2:00 p.m. at Hemmingsen Funeral Home in Auburn. Family will greet friends one hour prior to service.

Sandra Kay (Kess) Davis was born November 11, 1945 and entered into her new residence of Heaven on June 25, 2021 at 6:55 PM. Sandy was greeted by her Heavenly Father, and is enjoying the wholeness that only Jesus can offer. There is now no brokenness... View Obituary & Service Information

The family of Sandra Kay Davis created this Life Tributes page to make it easy to share your memories.

Send flowers to the Davis family.