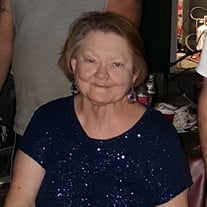 Sharon Kay (Sims) Scherer, daughter of Walter Scott and Virginia Lou (Blackard) Sims, was born October 8, 1949 in Waterloo, Iowa. Sharon was baptized and confirmed at St. Mary’s Catholic Church in Nebraska City, Nebraska, and attended Lourdes Central Catholic School. Sharon and her family moved to California, where she graduated from Amos Alonzo Stagg High School. She went on to attend nursing school and became a Licensed Practical Nurse. In 1965 Sharon married Steven Scherer in Reno, Nevada. The couple later divorced. In the years since her marriage, Sharon and her family had lived in Alaska, California, Texas, and Iowa before moving to Auburn, Nebraska in the early 1990’s. Sharon served as an LPN in Nebraska, in Iowa at the School for the Deaf, and in nursing homes in Texas. While living in Auburn at Westbury Heights Apartments, she continued as a caregiver to the other residents as well as the building. Sharon was a member of St. Joseph Catholic Church in Auburn. She loved to go shopping, to the casino, and to the movies. “General Hospital” was one of her favorite soaps on TV. Sharon was like the “Energizer Bunny”, always on the go and enjoying being with people, even in conversation she was doing circles in her wheelchair. With a heart of gold, Sharon had a great love for family, especially her grandkids, and friends. She was great at giving advice and being a friend. After learning she had cancer, and then breaking a hip, Sharon moved to the home of her daughter in Auburn. There she was cared for by family and health care professionals. With family around her, Sharon passed away on Sunday, November 5, 2017, at the age of 68 years and 28 days. She was preceded in death by her parents, former husband, infant grandson Travis Bridges, and brother Tommy Sims. Sharon is survived by her children Kathy and husband Mike Boyer of Auburn, Wesley Scherer of Auburn, Karen Lafferty and Ron Smith of Auburn, Kari and husband Rick Sikyta of Auburn; 16 grandchildren; many great-grandchildren; other relatives and friends. Memorials suggested to family choice. View Sharon's funeral service via Livestream at: https://livestream.com/accounts/13846112/events/7926771

The family of Sharon Kay Scherer created this Life Tributes page to make it easy to share your memories.

Send flowers to the Scherer family.