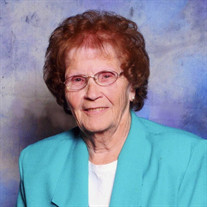 Shirley Jean Haith, one of five daughters of Howard and Ruth (Barker) Weyand, was born September 8, 1929 in Lincoln, Nebraska. Shirley grew up in Lincoln, was baptized and confirmed at Elm Park Methodist Church, and graduated from Lincoln High in 1947. On April 24, 1949, Shirley was united in marriage to Walter Haith at Elm Park Methodist Church in Lincoln by Rev. Bader. The couple would be blessed with 5 children: Barb, Judy, Walt, Jim, and Nancy. They first made their home in Auburn, and then moved to Brock in 1961. In October of 1989, they then made their home in Johnson. Shirley worked as a nurse’s aide at both St. Mary’s Hospital in Nebraska City and Nemaha County Hospital in Auburn. She also used to write articles for the Auburn, Brock, and Johnson newspapers. Shirley’s main occupation though, was raising her children and then being the caregiver of her husband Walter for 30 years. Shirley was a lifelong member of the Methodist Church. She belonged to the TOPS club for nearly 50 years and was proud of her success. She also was a member of the Red Hatters. Shirley loved watching sports, especially when she had kids or grandkids participating. She was the best grandma babysitter, helping to take care of her grandchildren that were close. Shirley also enjoyed crocheting and made afghans for her family. Shirley’s family and friends meant the world to her. On December 29, 2020, Shirley passed away at the Good Samaritan Society in Auburn, having reached the age of 91 years, 3 months, and 21 days. She was preceded in death by her parents, parents-in-law Walt and Opal Haith, husband Walt, sisters Pat Rippe, Janice Hachulich, Betty Ruth Bowen, son-in-law Darrell Holland, and great-granddaughter Esther Stoves. Those left to remember her caring ways include her children and their spouses Barb and Duane Caspers of Tecumseh, Judy and Dan Brown of Pawnee City, Walt and Suzette Haith of Las Vegas, NV, Jim and Jeanne Haith of Johnson, Nancy and Larry Henry of Lincoln; 10 granddaughters; 2 grandsons; 19 great-grandchildren +1 on the way; sister Norma Long of Lincoln; sister-in-law Sondra Runge of Lincoln; other relatives and friends. NOTE: CHANGE OF SERVICE LOCATION PLUS NO FAMILY GREETING FRIENDS A funeral service will be Tuesday, January 5, 2:00 p.m. at Lafayette Cemetery at Brock. Visitation will be Monday 9:00 a.m. to 8 p.m. Burial will be in Lafayette Cemetery at Brock. Current social distancing and mask requirements will be in place, and the funeral will be Livestreamed. Memorials suggested to family choice.

Shirley Jean Haith, one of five daughters of Howard and Ruth (Barker) Weyand, was born September 8, 1929 in Lincoln, Nebraska. Shirley grew up in Lincoln, was baptized and confirmed at Elm Park Methodist Church, and graduated from Lincoln... View Obituary & Service Information

The family of Shirley Haith created this Life Tributes page to make it easy to share your memories.

Shirley Jean Haith, one of five daughters of Howard and Ruth...

Send flowers to the Haith family.